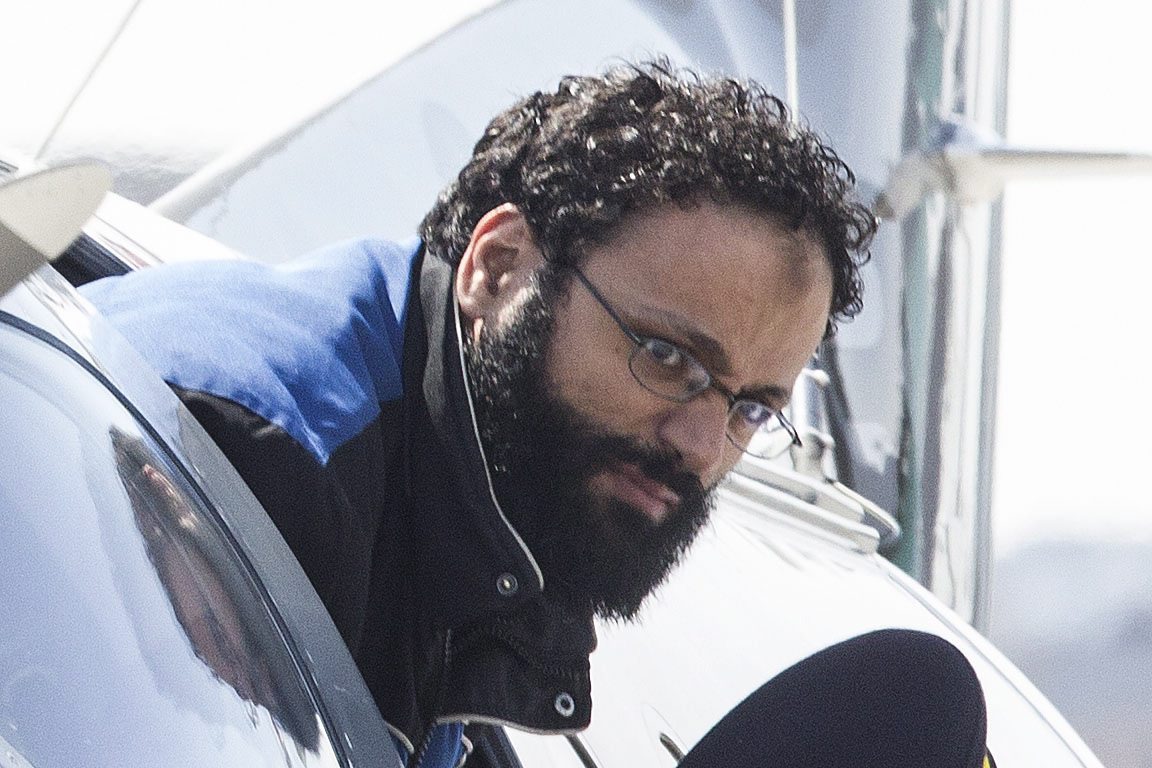 TORONTO A man accused of plotting with al Qaeda members in Iran to derail a train in Canada was due to appear in a Toronto court Wednesday after declaring at his initial court appearance that the charges against him are unfair. Law enforcement officials in the U.S. said the target was a train that runs between New York City and Canada.

Canadian investigators say Raed Jaser, 35, and his suspected accomplice Chiheb Esseghaier, 30, received guidance — but no money — from members of al Qaeda in Iran. Iran released a statement saying it had nothing to do with the plot, even though there were no claims in Canada that the attacks were sponsored directly by Iran.

In a brief court appearance in Montreal, a bearded Esseghaier declined to be represented by a court-appointed lawyer. He made a brief statement in French in which he rejected the allegations against him.

"The conclusions were made based on facts and words which are only appearances," he said in a calm voice after asking permission to speak.

Esseghaier, who was arrested Monday afternoon at a McDonald's restaurant in the train station, was later flown to Toronto for a court appearance Wednesday in the city where his trial will take place.

Jaser appeared in court earlier Tuesday in Toronto and also did not enter a plea. He was given a new court date of May 23. He had a long beard, wore a black shirt with no tie, and was accompanied by his parents and brother. The court granted a request by his lawyer, John Norris, for a publication ban on future evidence and testimony.

The case has raised questions about the extent of Shiite-led Iran's relationship with al Qaeda, a predominantly Sunni Arab terrorist network. It also renewed attention on Iran's complicated history with the terror group, which ranges from outright hostility to alliances of convenience and even overtures by Tehran to assist Washington after the Sept. 11, 2001, attacks on the United States.

Charges against the two men in Canada include conspiring to carry out an attack and murder people in association with a terrorist group. Police — tipped off by an imam worried by the behavior of one of the suspects — said it was the first known attack planned by al Qaeda in Canada. The two could be sentenced to life in prison if convicted.

Law officials in New York with knowledge of the investigation told The Associated Press the attack was to take place on the Canadian side of the border. They are not authorized to discuss the investigation and spoke only on condition of anonymity.

Amtrak and Via Rail Canada jointly operate routes between the United States and Canada, including the Maple Leaf from New York City to Toronto.

"I can just tell you that you are probably safer in New York City than you are in any other big city," Bloomberg told reporters Tuesday without discussing details.

Jaser's lawyer said his client questioned the timing of the arrests, pointing to ongoing debates in the Canadian Parliament over a new anti-terrorism law that would expand the powers of police and intelligence agencies.

Norris speaking outside the court said his client is "in a state of shock and disbelief."

He said his client would "defend himself vigorously" against the accusations, and noted Jaser was a permanent resident of Canada who has lived there for 20 years. Norris refused to say where Jaser was from, saying that revealing his nationality in the current climate amounted to demonizing him.

Canadian police also declined to release the men's nationalities, saying only they had been in Canada a "significant amount of time."

Muslim community leaders who were briefed by the Royal Canadian Mounted Police ahead of Monday's announcement of the arrest said they were told one of the suspects is Tunisian and the other from the United Arab Emirates.

But the United Arab Emirates embassy in Ottawa said in a statement Tuesday that neither of the two men were UAE nationals.

The London-based newspaper Al Arab reported Wednesday, citing unnamed sources in the Gulf, that Jaser is a Jordanian passport holder with full name Raed Jaser Ibrahim Amouri, who had visited the UAE several times and most recently in September 2011. The newspaper reported that the suspect also visited other Gulf countries including Qatar and Saudi Arabia.

It was not possible to independently confirm the report.

Esseghaier's LinkedIn profile lists him as having studied in Tunisia before moving to Canada, where he was pursuing a Ph.D. in nanotechnology at the National Institute of Scientific Research, a spokeswoman at the training university confirmed. His profile on a university department website — which has since been removed — says he was born in Tunis, Tunisia.

The investigation surrounding the planned attack was part of a cross-border operation involving Canadian law enforcement agencies, the FBI and the U.S. Department of Homeland Security. Canadian police said the men never got close to carrying out the attack.

The warning first came from an imam in Toronto, who in turn was tipped off by suspicious behavior on the part of one of the suspect.

"I was involved in alerting police about the suspect. I made some calls on behalf of the imam over a year ago," Toronto lawyer Naseer Syed said. He would not say what, exactly made the imam suspicious.

"The Muslim community has been cooperating with authorities for a number of years and people do the right thing when there is reason to alert authorities," Syed said, adding that he was speaking for the imam, who wished to remain anonymous.