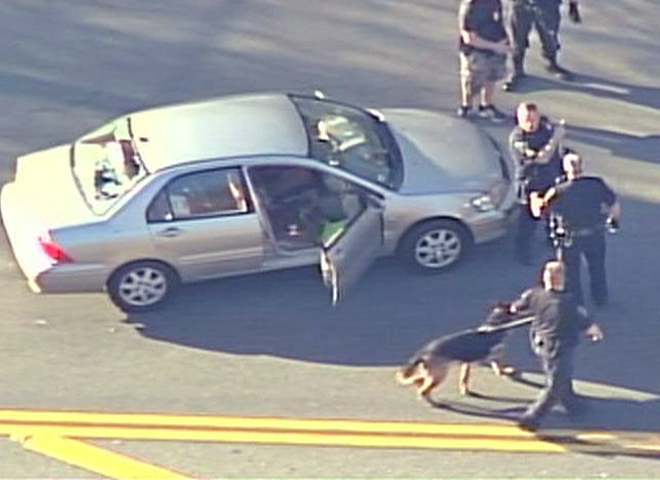 (CBS News) MALDEN, Mass. - One suspect is dead and two others have been arrested following an armed bank robbery in Saugus in which the thieves carjacked two vehicles in their attempt to escape.

Police were still searching Saturday for a fourth suspect.

CBS Station WBZ reports the robbery occurred shortly before 5 p.m. Friday at Saugusbank on Lynn Fells Parkway in Saugus. Two robbers left with an undisclosed amount of cash. A bank official confirmed no one was hurt.

WBZ correspondent Beth Romano reports two vehicles were carjacked by the thieves desperate to get away.

Helicopters, search dogs and armed police combed the area, before confronting suspects in a parking lot in Malden.

Gunfire was exchanged and one suspect was struck. One witness told WBZ he saw a gun battle with people inside the car shooting at officers and police opening fire on the car.

George Laskey, manager of the New England Motor Court, saw a red car speeding down the wrong side of the road before he heard gunshots. "It sounded like the Wild West out here," he told the Boston Globe.

The wounded suspect was transported to Massachusetts General Hospital where he was later pronounced dead. He was identified as 35-year-old William Eekasala.

A silver-colored sedan was seen inside a taped-off area of Broadway with its rear window shot out.

At a nearby apartment complex evidence was processed: Gloves, a handgun, and a bag of money with stacks of hundred dollar bills.

There were other tense scenes in Malden as dozens of state and local police officers could be seen canvassing the area. At another apartment complex, a red car was cordoned off, believed to be one of the carjacked getaway vehicles. It has been seen speeding down Broadway with police in pursuit.

Two reverse-911 calls were put out by the city, the second telling residents to remain vigilant because a fourth suspect was still on the loose as of 10:00 p.m. Friday night.