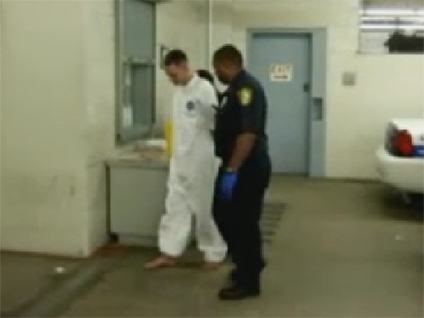 HONOLULU - A 28-year-old man was charged with murder and attempted murder in a freeway shooting rampage in Hawaii that left one woman dead and two people injured, officials said.

The Honolulu Prosecutor's Office charged Toby Stangel Saturday night in the shootings a day earlier that spanned a wide area of Oahu, the Honolulu Star-Advertiser reported on its website early Sunday.

Stangel's bail is set at $5 million and his initial court appearance was scheduled for Monday.

He was charged with 15 felony counts including murder in the second degree in the death of 54-year-old Tammy Nguyen, who was the mother of 10.

He was also charged with seven attempted murder counts and various firearms violations, the office said in an e-mail to the newspaper.

Five others were shot at but they weren't injured.

Police say the shooting spree lasted just 17 minutes and appeared to be random, with none of the victims knowing the suspect.

Above: Police at the scene of a random shooting spree in Honolulu Friday, June 3, 2011, that left one woman dead and two others wounded. (KGMB)

CBS Affiliate KGMB in Honolulu reports that Stangel, whose father heads the North Shore Christian Fellowship church, was raised in a loving church family but that those who knew him call him troubled and a loner, who rebelled at being a pastor's son.

One friend told KGMB that Stangel abused drugs and was violent.

Stangel has five prior misdemeanor convictions, including two DUIs and a criminal property damage case.

The suspect's parents, Mike and Karen Stangel, issued a statement saying, "We are broken and sick with grief. Our hearts and prayers go out to the innocent families who have been affected by this tragic act. We wish we had an explanation, but there simply is none. Those who know us, know we have always loved our son with an unconditional love. We thank all of you who have sent us your love, prayers & support. We are looking to the Lord Jesus for guidance, strength & comfort."