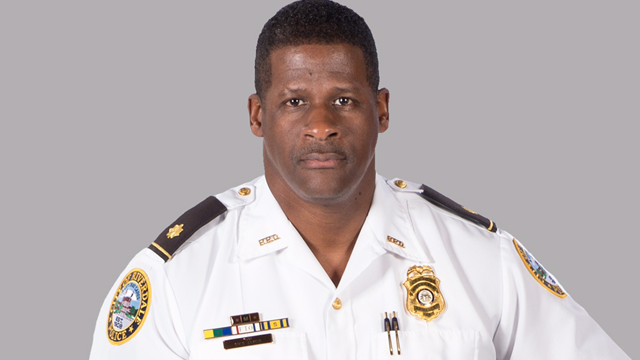 ATLANTA -- A suspect accused of gunning down a Georgia lawman has been charged with murder in the death of the 25-year police veteran. The fallen officer was struck by two shots as he helped colleagues serve a "no knock" search warrant at an apartment complex near Atlanta, authorities said Friday.

Maj. Greg Barney, a well-known figure in the community of Riverdale, died following surgery after Thursday's shooting, said Riverdale Police Chief Todd Spivey. Friends and colleagues were in mourning and two candles glowed outside police headquarters in the small suburban city of about 15,000.

Barney was shot while helping Clayton County officers serve a search warrant at an apartment complex in Riverdale, south of Atlanta's airport. Riverdale officers, including Barney, were guarding the perimeter while Clayton County police entered the apartment, police said.

When officers entered the apartment, Jerand Ross, 24, bolted through a back door, the Georgia Bureau of Investigation said in a statement Friday. Barney chased Ross, who shot him once in the abdomen and once in an arm, according to the statement.

The statement added that a Clayton County officer, Lt. Francisco Romero, pursued Ross as he ran behind the apartment buildings. After a short chase, Ross pointed a handgun at Romero, who shot the 24-year-old in the head, the GBI statement added.

Ross remains hospitalized at Atlanta Medical Center and is expected to survive, GBI spokesman Scott Dutton said Friday. It was unclear if Ross had an attorney.

The GBI's investigation includes observations from a witness, who saw Ross with two handguns while fleeing from the officers, according to the GBI statement.

"The witness saw Ross throw one of the handguns into the woods behind an apartment building," the GBI said in a statement. That gun was later found by a police dog.

Barney's body was taken to the GBI headquarters, where an autopsy was planned.

After the shooting, a flower wreath was left outside Riverdale police headquarters. WSB-TV showed images of two candles glowing outside the police department's entrance. At a nearby church, Frances Lee said a message was being put on the sign: "Our prayers are with the Barney family."

Barney was well-known in Riverdale, a city suburb just south of Hartsfield-Jackson Atlanta International Airport. Residents recalled him as a police department commander and school resource officer who left a strong impression.

In 2004, Barney became the first African-American to serve as Riverdale's police chief when he accepted the interim post after the retirement of its chief. He served as interim chief for five months, the Atlanta newspaper reported.

"Because of his charismatic personality, Major Barney was an iconic figure in the City of Riverdale," Clayton County Sheriff Victor Hill said in a statement. "Anyone who ever lived or worked in the Riverdale knew him, and his name was synonymous with the city."

Akeem Bivins said he first me Barney at Riverdale High School, when he was a student and Barney was the school resource officer. Barney often spoke to him about staying on the right path, he told WXIA-TV.