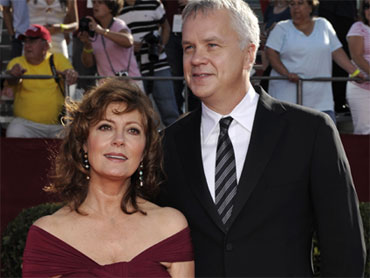 The actress' rep confirmed the split to People magazine on Wednesday, saying, "Actress Susan Sarandon and her partner of 23 years, actor Tim Robbins have announced that they separated over the summer. No further comments will be made."

Sarandon, 63, and Robbins, 51, met on the set of the 1988 film "Bull Durham." They have two children together, sons Jack, 20, and Miles, 17. The actress also has another daughter, 24-year-old Eva, from her previous relationship with director Franco Amurri.

Before Amurri, Sarandon was married to Chris Sarandon, whom she met in college. They divorced in 1979.

Sarandon and Robbins have been admired for their enduring relationship - especially long by Hollywood standards - and the fact that they never married.

"I won't marry because I am too afraid of taking him for granted or him taking me for granted - maybe it will be a good excuse for a party when I am 80," Sarandon has said in the past, according to the report.

The two are both Academy Award-winning actors (Sarandon for 1995's "Dead Man Walking" and Robbins for 2003's "Mystic River") and are known for their political and social activism.