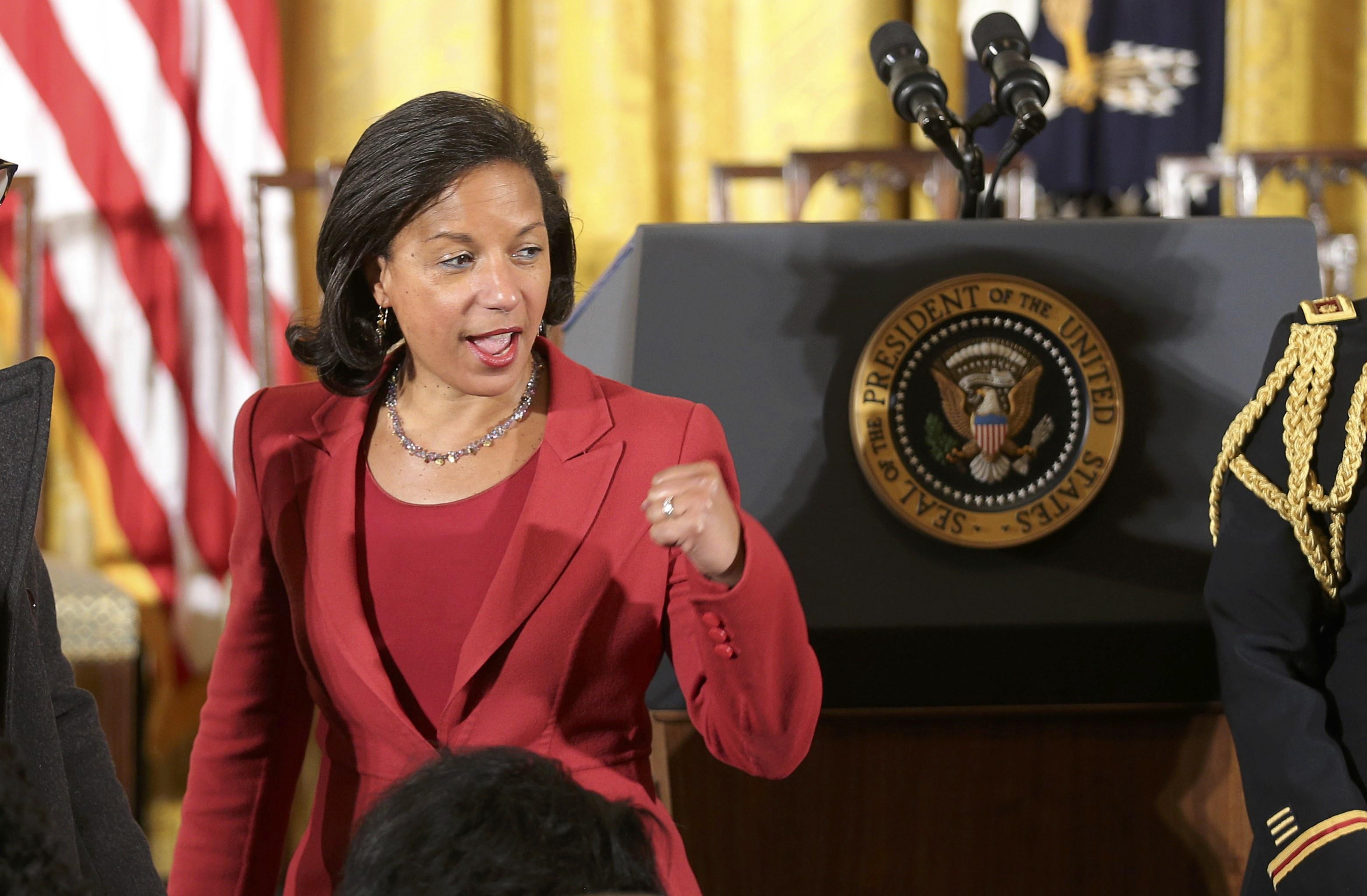 In an interview on MSNBC’s “Andrea Mitchell Reports,” Rice was asked to address allegations that she had used U.S. intelligence for political purposes by unmasking certain names of Americans.

Asked if she sought the names of people or unmasked people involved in the Trump transition in order to spy on them or expose them, Rice said, “Absolutely not for any political purposes -- to spy, expose, anything.”

Rice also denied being the person who leaked the identity of Michael Flynn, Mr. Trump’s former national security adviser: “I leaked nothing to nobody and never have and never would.”

As Obama’s national security adviser, Rice said her job was to protect the American people and in order to do that, she said she received a compilation of intelligence reports every morning from the intelligence community to provide her team with the best information about what was going on around the world.

“There were occasions when I would receive a report in which a U.S. person was referred to, name not provided, just U.S. person,” Rice said. “Sometimes, in that context, in order to understand the importance of the report, and assess its significance, it was necessary to find out or request that information as to who that U.S. official was.”

Rice described a hypothetical example of a conversation between two foreigners about a conversation they were having with an American who was proposing to sell them high-tech bomb-making equipment. As national security adviser, she said it would be important to know whether it was a “kook” who doesn’t actually have the equipment versus a serious person or company or entity with the ability to provide that technology.

“When that occurred, what I would do -- or what any official would do -- is to ask their briefer whether the intelligence community could go through its process -- and there’s a long-standing established process -- and decide whether that information as to who that identity of the U.S. person was could be provided to me,” she said. “The intelligence community made the determination as to whether or not the identity of that American individual could be provided to me.”

Rice said that when the unmasking of an American was requested by her or a senior national security official, it would only come back to the person who requested the information and was not typically broadly disseminated within the national security community.

“The notion that, which some people are trying to suggest, that by asking for the identity of an American person, that is the same as leaking it, is completely false,” she said. “There’s no equivalence between so-called unmasking and leaking.”

Rice categorically denied the president’s claim from a month ago that Obama ordered a wiretapping of Trump Tower during the 2016 campaign -- an allegation she said “shocked” her.

“Absolutely false,” she said when asked if there was any truth to it. “The intelligence community, the director of the FBI, has made it very clear. There was no such collection, surveillance on Trump Tower or Trump individuals.”

The most senior level government officials are not masked in intelligence reports, including someone who would have held Rice’s or Michael Flynn’s rank of national security adviser. They would not be named, but would be referred to by their titles. So, Flynn may not have been masked in the intercepts with Russian Envoy Sergey Kislyak, with whom Flynn communicated several times during the transition period. One way the intelligence reports may have identified Flynn is “National Security Adviser designate.”

Senior officials of Flynn’s level are not accorded the presumption of privacy. If Rice was asking for names to be unmasked, those would have been lower level officials or those without specific titles. For example, Jared Kushner would have been masked because he did not have a title during the transition. White House officials empowered to request unmasking are the president, vice president, national security adviser, and deputy national security adviser.