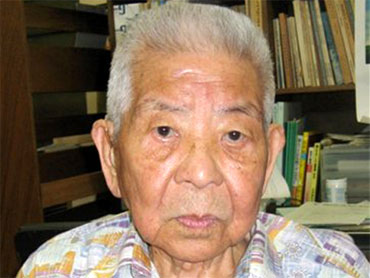 Tsutomu Yamaguchi, the only person officially recognized as a survivor of both the Hiroshima and Nagasaki atomic bombings at the end of World War II, has died at age 93.

Yamaguchi was in Hiroshima on a business trip for his shipbuilding company on Aug. 6, 1945, when a U.S. B-29 dropped an atomic bomb on the city. He suffered serious burns to his upper body and spent the night in the city.

He then returned to his hometown of Nagasaki, about 190 miles to the southwest, which suffered a second U.S. atomic bomb attack three days later.

The mayor of Nagasaki said "a precious storyteller has been lost," in a message posted on the city's Web site Wednesday. Yamaguchi died Monday morning of stomach cancer, the mass circulation Mainichi, Asahi and Yomiuri newspapers reported.

Yamaguchi when they were attacked, although other dual survivors have also been identified.

"My double radiation exposure is now an official government record. It can tell the younger generation the horrifying history of the atomic bombings even after I die," Yamaguchi was quoted as saying in the Mainichi newspaper last year.

In his later years, Yamaguchi gave talks about his experiences as an atomic bomb survivor and often expressed his hope that such weapons would be abolished.

He spoke at the United Nations in 2006, wrote books and songs about his experiences, and appeared in a documentary about survivors of both attacks.

Last month he was visited in the hospital by filmmaker James Cameron, director of "Titanic" and "Avatar," who is considering making a movie about the bombings, according to the Mainichi.

Immediately after the war, Yamaguchi worked as a translator for American forces in Nagasaki and later as a junior high school teacher.

Japan is the only country to have suffered atomic bomb attacks. About 140,000 people were killed in Hiroshima and 70,000 in Nagasaki.

Yamaguchi is one of about 260,000 people who survived the attacks. Some bombing survivors have developed various illnesses from radiation exposure, including cancer and liver illnesses.