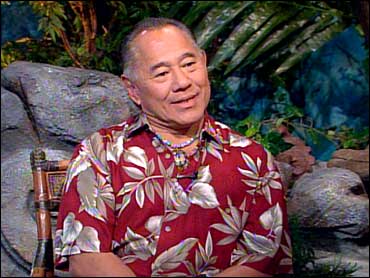 No one can say Bruce Kanegai is anything but tough. Even when he was writhing in pain from an intestinal blockage, he soldiered on in pursuit of the million dollar prize on "Survivor: Panama-Exile Island."

But in the end, the pain was too much – and too much to risk, and Bruce, a 58-year-old karate instructor and survival trainer, wound up in the hospital and out of the game.

He's feeling better now and appeared Friday morning on the CBS Early Show to talk about the experience. "I knew it was very, very serious. More painful than when I got bit by the rattlesnake," he told co-anchor Tracy Smith. "When I was gone, I figured I'm going to be disqualified. That was really crushing for me. I trained so hard for the show and it was a big dream of mine to be on the show. And I thought I was competing so well."

The rest of the Survivors will miss him, judging by

a secret scene(video)
, shown only on The Early Show, in which Cirie slips on Bruce's abandoned shoes, hoping they will lend her some of his strength and wisdom.

While no one got voted out in Episode 10, that doesn't mean no one felt the sting of rejection or the flames of high pressure.

Trend to watch: Shane seems to be going for the Naked Guy title, originated way back when by Richard Hatch, the very first winner of "Survivor," who is now in a real life game of endurance – in a Rhode Island jail awaiting next week's sentencing for tax evasion.

Last week, Shane jumped at the chance to parade around in front of Danielle and Cirie, after Cirie – a nurse – told him the discomfort he was feeling in his "nether regions" was nothing more than a rash that might benefit from a little air.

This week, as Aras, Cirie and Danielle gobbled down a huge Reward feast – gossiping about whether Courtney has a crush on Shane – Shane was elsewhere, contemplating a logistical problem.

Realizing he would have to lend a hand to carry the hospital-bound Bruce on a stretcher to a waiting boat, Shane once again seized the moment and stripped naked for the job – saying he didn't want to have to sleep in wet pants.

Well, that explains it.

Courtney meanwhile was a few steps away, comforting Bruce as he endured his last few minutes on the beach.

Trouble may be bubbling up for Courtney and Shane, who both seem to be grating on their tribemates' nerves. She was voted "most annoying" and he was pointed to as the Gitano who mistakenly believes he is running the game.

Handy talent to have in Episode 10: artistic ability.

The castaways, picking up their Tree Mail, were forced to make voodoo dolls – of themselves.

Looks didn't count but it couldn't have hurt to have a nice looking face – right before the dolls went up in flames.