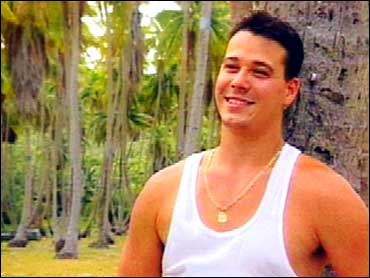 The Heroes tribe bit the bullet and did Wednesday night what they should have done last week - ousted an injured James from the game of "Survivor: Heroes vs. Villains."

In a special Wednesday night episode (the show usually airs Thursdays on CBS), both tribes went to tribal council and eliminated a member. On the Villains' team, Tyson orchestrated his own demise.

Photos: "Survivor: Heroes vs. Villains"
"Survivor" Through The Seasons

There were some game-changing moments on both sides as, in a new twist, contestants performed the challenges individually and the winners from each tribe faced off for a reward. Boston Rob and Candice successfully navigated the rope maze to win the respective immunity necklaces. Then Rob beat Candice in a more difficult version of the same challenge to win a reward for the Villains.

In addition to getting a meal of hot dogs and soda at tribal council, the Villains also won the right to listen in on the Heroes' tribal council meeting.

Although Colby, who lagged behind both James and Rupert in the rope challenge, was prepared to be sent packing, the heroes decided that James' injury would only hobble them going forward. Host Jeff Probst speculated at the end that this could be the birth of a united group.

But Colby's rescue may be short-lived. James' harsh criticism of Colby's performance could put more doubt about him in the other team members' minds.

Meanwhile, Rob and Russell went toe-to-toe in swagger and threats and Russell came out on top. Believing (correctly) that Russell had the hidden immunity idol, Rob came up with what appeared to be a foolproof plan to flush out the idol and send Russell home.

If everyone in their alliance voted as Rob had devised (three votes each for Parvati and Russell) and nobody played the idol, there would have been a re-vote in which Russell would have been targeted. The worst that could happen was a three-way tie with Tyson added to the mix.

If Russell gave Parvati the idol as the team expected would happen (it did), Parvati's votes would not count and either Russell would be voted off or if Russell and Tyson tied, Russell could be ousted in a revote.

But the scheming Russell planted enough doubt in Tyson's mind that he switched his vote from Russell to Parvati, even though he had nothing to gain by doing so. The switch gave him the majority of votes after Parvati's votes were tossed out.

In his two seasons on "Survivor" Russell has not put himself in jeopardy before, the way he did when he gave the idol to Parvati. This time the bold move worked, but was it a game-changer?
https://www.cbsnews.com/htdocs/cbsnews_web_tools/