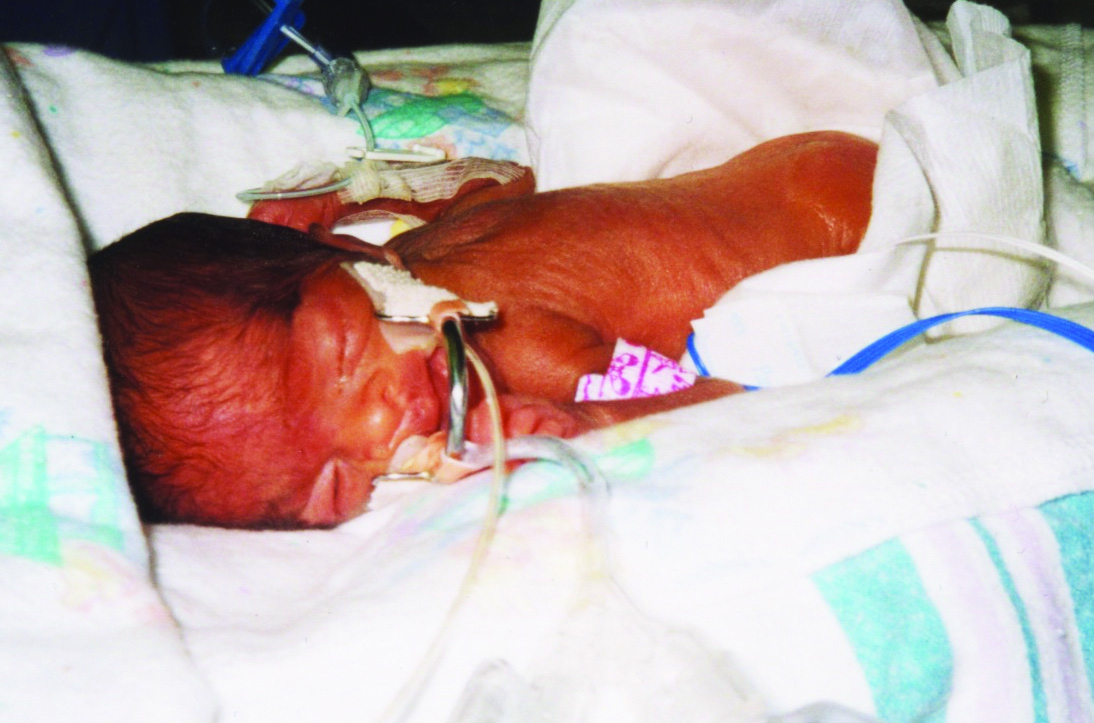 Elise Jackson was 20 weeks pregnant, in 2002, when she felt her water break. She and her husband Todd went to the hospital where she was told she was in labor. Doctors were able to delay delivery for a few more weeks, but she still gave birth to her baby very early, at 25 weeks.

Her son, Elijah, weighed just over one pound when he was born. Like other extremely early premature babies, he needed help breathing and had a host of complications because he wasn't able to finish developing in the womb. He spent seven months in the hospital and had several surgeries before coming home. Now an active 13-year-old, he has made substantial progress in development, but continues to need glasses, speech therapy and other therapies. Elijah, Elise and Todd Jackson are the 2015 Ambassadors for the March of Dimes, which funds and promotes research on the widespread issue of premature birth.

Their story highlights the progress that has been made over the last two decades in helping premature babies survive and even thrive.

Premature babies account for about one in nine births in the U.S.

According to a new study of more than 34,600 pre-term babies born between 1993 and 2012, published Tuesday in JAMA, overall survival rates for preemies between 22 and 28 weeks of gestation increased to 79 percent in 2012, up from 70 percent in 1993. The smallest babies had the biggest improvement in survival rates, showing a more than 5 percent improvement.

"I say we're cautiously optimistic," lead researcher Dr. Barbara J. Stoll, a professor at the Emory University School of Medicine and director of the Pediatric Center of Emory and Children's Healthcare of Atlanta, told CBS News.

"The current improvement has to be tempered by the work that still needs to be done to increase the likelihood that all very low birth-weight, extremely pre-term infants leave the NICU and go home without having suffered any major complications."

The study suggests that Elijah's experience, after being born at the cusp of the gestational age when a baby can survive, is growing less uncommon. Survival rates for babies born at less than 25 weeks have improved --with about a third of babies born at 23 weeks surviving. But below 25 weeks, most of them will still have major complications.

Babies born just a couple of weeks later, at 25 to 28 week of gestation, are more likely to grow up without major health issues. During the study period, survival without major complications increased approximately two percent per year for this age group, while infants at 22 to 24 weeks of gestation showed no improvement.

The study found that hospital infection control and pre-birth medication both contributed to improvements.

Corticosteroids are now given to babies who are on the way too early at 90 percent of U.S. pre-term birth centers. These drugs, though not without some risk, help prevent breathing problems and vein hemorrhages, especially in very small infants with weak systems.

Infection control efforts, which are becoming more standardized and stricter at hospitals in general, including NICUs, have also helped reduce cases of "late-onset sepsis" or infections that occur in the days following birth. Very early preemies are at high risk -- commonly for lung, brain or blood infections -- because of the combination of medical interventions and very weak immune systems.

"It's heart-warming that we've been able to reduce the infection," said Stoll. "A baby comes out very tiny, everyone expects that they'll need to be resuscitated they'll need to go on a ventilator, but these are babies who've survived the first few days, the first week."

"Families have started to bond with them, they start to think that, yes, this baby will come home with us, and they can get an infection which can be anything from a relatively mild bloodstream infection to severe infection that makes the baby very, very sick or even die."

More than 450,000 babies are born prematurely every year in the U.S., according to the CDC. Pre-term birth contributes to about a third of all infants deaths.

Elise Jackson's pregnancy and birth are an example of both the trials and triumphs of medical care for very early pre-term babies. The fact that the birth could be prolonged for five weeks after her water broke and that Elijah was able to survive only slightly more than halfway into gestation shows the progress of obstetrics and neonatal care. At the same time, his early arrival couldn't be fully delayed and he has had some long-term health complications.

"For parents of babies born very early -- 22-28 weeks -- these data are showing improvements in outcome. We are gratified by the progress, but there is so much more that could be done if we could understand what causes premature labor and birth," Dr. Edward McCabe, Chief Medical Officer for The March of Dimes, told CBS News in an email. McCabe credits research the March of Dimes funded for helping to develop treatments for premature babies like the surfactant therapy Elijah Jackson received that have helped improve survival and long-term health.

"Our focus is on preventing premature births and we are making excellent progress," he said. "We have saved hundreds of thousands of babies from premature birth since the rate peaked in 2006."

Stoll says that part of the problem is that doctors don't yet know exactly what triggers pre-term labor in so many pregnant women. Good prenatal care and avoiding smoking, alcohol and drugs can help pregnant women carry to full term.

But, once labor starts, even when it is far to early for the health of the baby, doctors are limited in the ways they can pause the process. There is a preventative drug for women who have had pre-term labor before and doctors are working to discourage planned, early cesareans. But for the hundreds of thousands of spontaneous pre-term births every year, the options are limited.

"The holy grail of all of this is the reduction of spontaneous pre-term birth and bringing every pregnancy to term -- or at least pushing the window a little bit so the baby who would have been delivered at 24 weeks now gets delivered at 27 weeks," Stoll said.

Stoll says other triggers aren't entirely know and new research in genetic causes, environmental factors and immune system responses could help predict the risks for early pre-term labor in the future. For the babies born between 22 and 28 weeks, research is working on how to consistently help them develop normally.

"We're still really in an area of needing more research," said Stoll, who adds that funding for studies on both pregnancy complications and premature babies is limited. "Our hope over time is not only to improve survival, but also to improve the likelihood of normal, typical neurodevelopment."