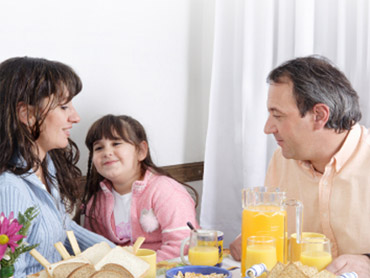 A survey from The National Center on Addiction and Substance Abuse (CASA) says that the more often children have dinners with their parents, the less likely they are to smoke, drink or use drugs, and that parental engagement fostered around the dinner table is one of the most potent tools to help parents raise healthy, drug-free children.

But, as "Early Show" co-anchor Maggie Rodriguez stressed, parents can't just sit down with their kids -- they have to have talk with them about their lives.

Family Dinners are Worth Remembering

Child and adolescent psychologist and "Early Show" Contributor Dr. Jennifer Hartstein agreed, adding, "It is important to sit down, open conversation, ask what's going on, share with them what's going on for you, really make it a dialogue at the dinner table, which I think is really important and getting lost in our very busy lives."

In addition to this survey, Rodriguez said numerous other benefits for kids have been shown to stem from family dinners.

Hartstein pointed out a few, saying, "It shows it is a protective factor for so many risky behaviors, less mental illness, they're going to be more open. It's going to help them in school, it's going to promote positive behaves and decrease a lot of the negative behaviors we talk so much about. Any way you look at it, it is a protective factor to sit and have dinner together."
She continued, "The more the kids feel connected to you the more likely they are to come to talk to you. … When something is wrong, they need help, something is going wrong. How great to have open dialogue back and forth to have that in your house."

But how can you find time for family dinners during your hectic week?
"It is really, really hard," Hartstein said.

She suggests scheduling dinner - even if it's not every night.

"You want a tech-free zone, no technology on the table, TV is off. Interaction, conversations with one another is key in all of this."

"Think it through and make it open," she said.

"Try and do this together," she advised. "Maybe Sunday everybody works together in the kitchen to plan the meals for the week so you run in and can just make it happen."