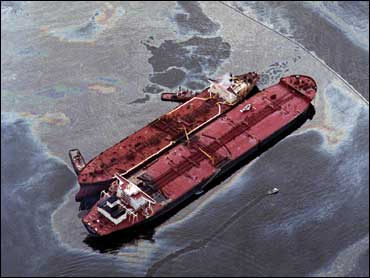 The Supreme Court on Wednesday slashed the $2.5 billion punitive damages award in the 1989 Exxon Valdez disaster to $500 million.

The court ruled that victims of the worst oil spill in U.S. history may collect punitive damages from Exxon Mobil Corp., but not as much as a federal appeals court determined.

Justice David Souter wrote for the court that punitive damages may not exceed what the company already paid to compensate victims for economic losses, about $500 million compensation.

Souter said a penalty should be "reasonably predictable" in its severity.

"This is generally a pro-business Supreme Court and this ruling will help cement that reputation," says CBS News chief legal analyst Andrew Cohen. He adds that in addition to giving the oil giant a reprieve on the multi-billion dollar damage award, "it also creates precedent and a tough standard that other plaintiffs will have to overcome in future lawsuits of this magnitude."

Exxon asked the high court to reject the punitive damages judgment, saying it already has spent $3.4 billion in response to the accident that fouled 1,200 miles of Alaska coastline.

A jury decided Exxon should pay $5 billion in punitive damages. A federal appeals court cut that verdict in half in 1994.

The Supreme Court divided on its decision, 5-3, with Justice Samuel Alito taking no part in the case because he owns Exxon stock.

Exxon has fought vigorously to reduce or erase the punitive damages verdict by a jury in Alaska four years ago for the accident that dumped 11 million gallons of oil into Prince William Sound. The environmental disaster led to the deaths of hundreds of thousands of seabirds and marine animals.

In dissent, Justice John Paul Stevens supported the $2.5 billion figure for punitive damages, saying Congress has chosen not to impose restrictions in such circumstances.

Justice Ruth Bader Ginsburg also dissented, saying the court was engaging in "lawmaking" by concluding that punitive damages may not exceed what the company already paid to compensate victims for economic losses.

"The new law made by the court should have been left to Congress," wrote Ginsburg. Justice Stephen Breyer made a similar point, opposing a rigid 1 to 1 ratio of punitive damages to victim compensation.

Writing for the majority, Souter said that traditionally, courts have accepted primary responsibility for reviewing punitive damages and "it is hard to see how the judiciary can wash its hands" of the problem by pointing to Congress for a solution.

A jury decided that the company should pay $5 billion in punitive damages. A federal appeals court cut that verdict in half.

The problem for the people, businesses and governments who waged the lengthy legal fight against Exxon is that the Supreme Court in recent years has become more receptive to limiting punitive damages awards. The Exxon Valdez case differs from the others in that it involves issues peculiar to laws governing accidents on the water.

Overall, Exxon has paid $3.4 billion in fines, penalties, cleanup costs, claims and other expenses resulting from the worst oil spill in U.S. history.

The commercial fishermen, Native Alaskans, landowners, businesses and local governments involved in the lawsuit have each received about $15,000 so far "for having their lives and livelihood destroyed and haven't received a dime of emotional-distress damages," their Supreme Court lawyer, Jeffrey Fisher, said when the court heard arguments in February.