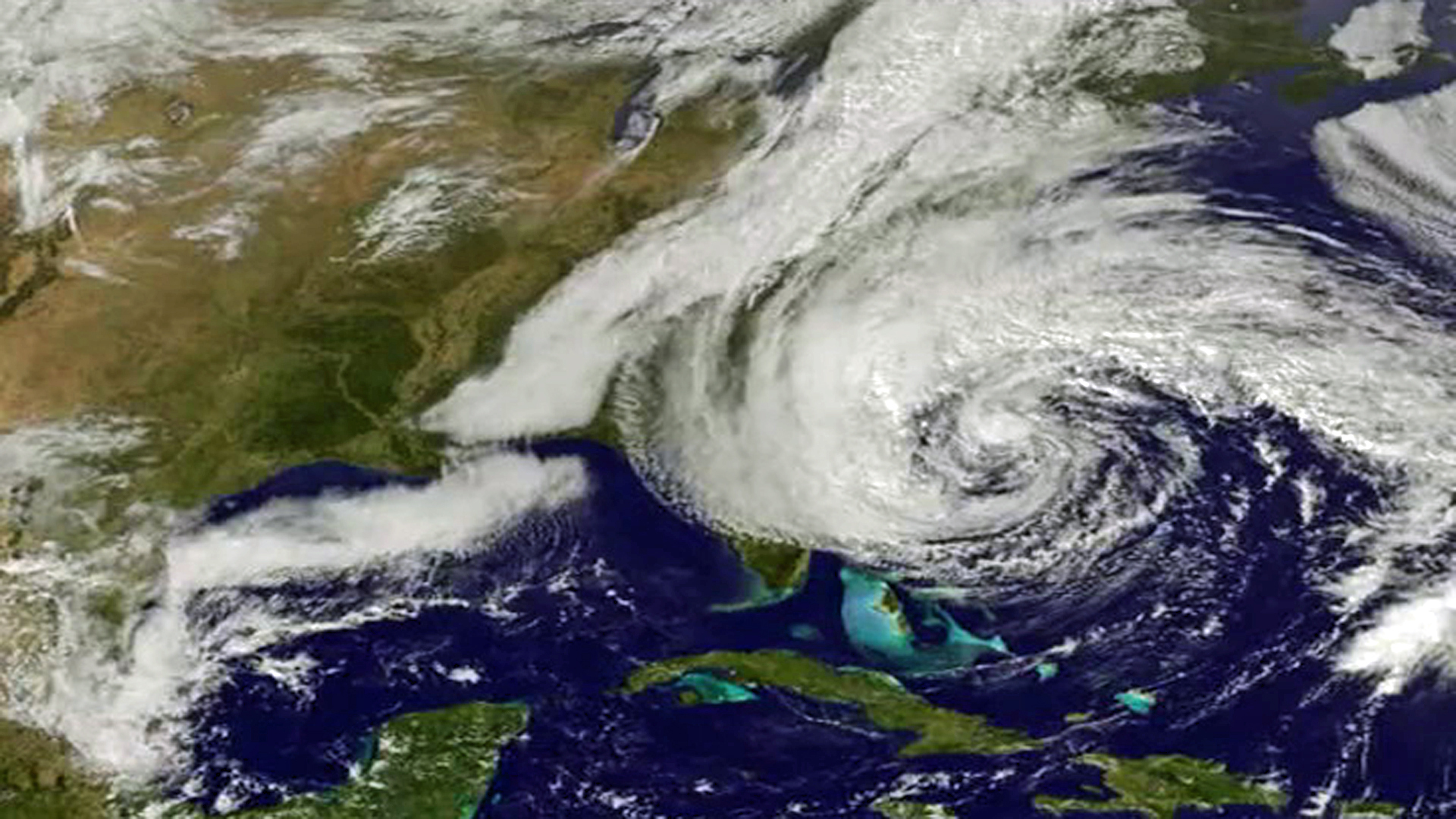 WASHINGTON It was the moment a run-of-the-mill hurricane mutated into a monster named Sandy.

Paradoxically, it was the same time Sandy lost much of its wind power, dropping from a hurricane to a tropical storm. It was a Friday night and Sandy had just passed the Bahamas and was being enveloped by an ordinary cold front coming off the Southeast. It was changing how it got its power, where its highest winds were and even what it looked like.

But mostly it was getting bigger. Dangerously large. And then it merged with a second storm, turned record huge and pivoted toward the nation's largest city.

It was that enormity that set off alarms in the people who knew weather, especially those living in the New York area. For a week forecasts placed Sandy on its path toward New York and it was it sticking to it.

Months earlier, Princeton University professor Michael Oppenheimer had written a scientific study about the dangers of storms hitting the nation's largest city, and now he was watching one develop. He was enthralled but fearful, hoping that the forecasts would change.

"It was just this monster coming at us," he said.

In the year since Sandy blew through the East Coast, meteorologists have pored over forecasts, satellite photos, computer models, and even the physical damage to try to get a sense of what made Sandy the demon it was.

Put simply, what made the superstorm dangerous and freaky in more than a dozen different ways was a meteorological trade in: The hurricane lost some oomph in winds in return for enormous size. And just like Katrina seven years earlier, Sandy caused so much havoc because of its record girth, National Hurricane Center Director Rick Knabb said, adding: "Smaller versions of those same storms would not have had the same scope of disasters."

Sandy's breadth pushed much more water into New Jersey and New York, dropped three feet of snow in West Virginia, caused 20 foot waves on the distant Great Lakes, and registered other records reflecting whopping energy. It meant at least 182 deaths and $65 billion in damage in the United States, the second costliest weather disaster in American history behind only Katrina, according to the National Oceanic and Atmospheric Administration.

"I don't know if we'll ever see another storm like this," said James Franklin, hurricane center chief forecaster. "The atmosphere can do a lot of weird stuff. I don't want more like this."

The question is, how likely is it that there will be more? Researchers continue to study whether Sandy was a forerunner of similar storms.

"One of the major lessons scientifically is that there could be these configurations of meteorological events that can combine to be very damaging in ways that are surprising," said NASA and Columbia University climatologist Cynthia Rosenzweig, who warned in a 2001 report of the kind of flooding that New York endured due to Sandy. She said other cities around the world have learned from New York's Sandy experience and are better preparing for flooding worsened by climate change and sea level.

A September study by NOAA found that global warming triggered sea level rise is making Sandy-type flooding more likely. For example, the flooding that swamped Sandy Hook, N.J., last year would have been considered a once-in-435-year event in 1950, but it is now a once-in-295-year event. By 2100, it could become a once-in-20-year event, the study said.

In the past century, sea level in the New York region has risen about a foot, two-thirds of it caused by man-made climate change, said Princeton's Oppenheimer.

The result? Fifty thousand people suffered flooding due to Sandy that wouldn't have happened if not for global warming, he said.

Sandy wasn't always a big bully. For several days, this looked like a "kind of boring" hurricane, said NOAA meteorologist Ian Sears, who flew into the storm three times in a hurricane hunter airplane. Then came Friday night, nearly three days before landfall in New Jersey, when the cold front chugging west hooked up with the tropical system steaming north.

It wasn't a marriage of equals.

Sandy "was surrounded and absorbed as much as merged," Franklin said.

Suddenly, everything changed. Sandy wasn't getting its energy from warm water below like a normal hurricane, but being fueled from above. The strongest winds were about 100 miles to the west of the storm's center, something quite un-tropical.

That moment "was absolutely critical," said Jeff Masters, director of meteorology at Weather Underground and a former hurricane hunter meteorologist. "You had a wind field that more than doubled in less than one day. That's a huge amount of power to put in one storm."

Sandy kept growing. Its band of tropical storm force wind stretched for a record 1,000 miles, nearly the distance from New York to Orlando. The size was "one of the biggest factors in the unusually large amount of surge in the New Jersey and New York coastline," said Jamie Rhome, the hurricane center's chief for storm surge.

One way to measure a storm's strength is how low the barometric pressure drops. When Sandy made landfall it nearly set the record for the lowest central pressure measured north of the Mason-Dixon Line in the United States.

A NOAA experimental program measured Sandy's "destruction potential" for waves and surge at a record high 5.8 on a 6-point scale. Masters said that meant Sandy's winds "had the energy of five Hiroshima-sized A-bombs." It was a "Godzilla-like beast of a storm," he said.

When Sandy combined with a second cold front, it regained some of its lost power. That's when Sandy went "from ginormous to mega-normous," said hurricane center specialist Eric Blake, who wrote agency's final 157-page report dissecting what made Sandy tick.

But more importantly, the second merger took the storm away from a path that would likely have curved harmlessly away from the coast. Instead, it triggered a sharp left turn into New Jersey. That meant a worst possible scenario with the storm pushing water in a direct perpendicular hit into land through a sheltered harbor, concentrating the surge as if it was being forced through a funnel, surge expert Rhome said.

While tropical storms do sometimes reach New Jersey, they rarely make that sharp westward turn - Columbia University professor Adam Sobel, who has studied Sandy extensively, ran computer models that show it should happen only once in 700 years. They usually hit from the south, as did Hurricane Irene when it landed in Brigantine, N.J., in 2011, a direction that doesn't maximize the surge like Sandy's punch from the east. Though Irene caused billions of dollars in damage mostly in inland flooding, it didn't live up to its billing in the New York metro area; many New Yorkers may have downplayed Sandy because of their Irene experience.

Sandy made landfall, oddly enough, in Brigantine, slamming in from a different direction so the surge was far worse. It technically reached New Jersey as a "post-tropical cyclone," not a hurricane, but that distinction means little. It was a monster.

"Look at Sandy as a whole, the fact that you had a blizzard associated with a major (tropical) event that set record surges in New York Harbor, that destroyed part of the New Jersey coast, that had record waves and surges in Lake Michigan," National Weather Service director Louis Uccellini said. "All those things combined really made this a unique system."