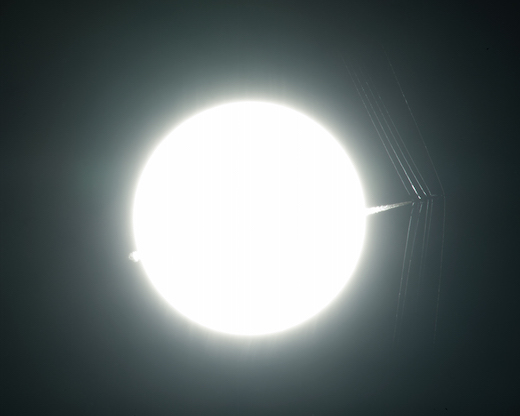 A supersonic plane recently zoomed past the sun, and its light-bending shock waves were captured in a stunning new image.

The plane, a T-38C manned by a pilot for the U.S. Air Force Test Pilot School, was photographed using an updated version of a 150-year-old technique called Schlieren photography.

Schlieren photography typically uses a bright light source and a speckled background to reveal changes in the density of air. Shock waves squish and stretch air, changing the air density. That, in turn, alters how light rays bounce off the air, and these changes show up in a shadow image. [Supersonic! The 11 Fastest Military Planes]

In the past, Schlieren photography required a very bright light source and some complicated optics. As a result, it was typically performed only on supersonic planes in wind tunnels. However, NASA recently developed new methods of Schlieren photography, in which the sun or the moon forms both a luminous source and the mottled background needed for the images.

NASA has been working on the project in an effort to design quieter supersonic jets. The Federal Aviation Administration has banned the ear-splitting jets from flying over unrestricted air space since 1973, because of their incredibly loud sonic booms. But if scientists better understand the shock-wave structure, they can predict when and where the shock wave is the loudest, according to NASA. In turn, this could help designers craft supersonic jets that produce quieter booms.

Several companies are currently working on supersonic jets. For instance, Spike Aerospace is developing a commercial airliner that could speed from New York City to London in a mere 3 hours. The plane would fly at Mach 1.8, or 1.8 times the speed of sound, (1,370 mph, or 2,205 km/h). A more pie-in-the-sky (or plane in the sky?) idea aims to zoom people between the two big cities in just 30 minutes. That concept, called the Skreemr, would need a "magnetic rail-gun launching" system to take off and fly at 10 times the speed of sound, or about 7,600 mph (12,300 km/h).