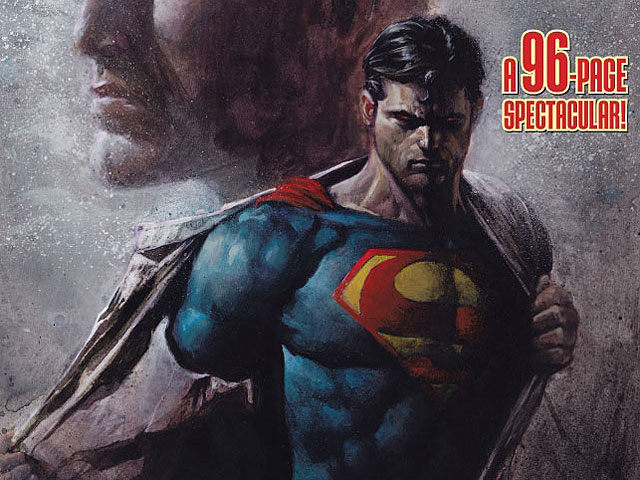 Superman has started a stir with a declaration in the new issue of "Action Comics" that he intends to renounce his U.S. citizenship because he's tired of his actions being construed as instruments of U.S. policy.

The Man of Steel, who emigrated to Earth as a child from Krypton and was adopted by the Kents in Smallville, Kansas, comes to the conclusion that he's better off serving the world at large after he's accused of causing an international incident by flying to Tehran amid a large protest.

Noting the huge police presence and warnings from the army there about harsh repercussions, he wanted the demonstrators to know "that they weren't alone."

The nine-page story was written by David S. Goyer and was drawn by Miguel Sepulveda. In it, Superman for 24 hours stands silently, bearing the brunt of gasoline bombs, taunts and threats but also receiving cheers and roses from supporters, as the more than 1 million-strong crowd protests but isn't fired on before the demonstration ends peacefully.

"I stayed in Azadi Square for 24 hours. I didn't move. I didn't speak. I just stayed there," Superman tells the U.S. national security adviser, who has feared the all-powerful hero has gone rogue.

But Iran's government refers to it as an act of war and accuses him of acting on behalf of the U.S. president.

And that, Superman explains, is why he is going to give up his citizenship.

"`Truth, justice and the American way' — it's not enough anymore," he says. "The world's too small, too connected."

It's not the first time a comic character has been fed up with being seen as part of U.S. policy.

In the 1970s, Marvel Comics' Captain America — aka Steve Rogers — gave up his famed suit and shield and adopted the identity Nomad around the time the Watergate scandal began heating up.

News of the Superman decision has drawn critical comments in blogs and online forums, but D.C. Comics says it not about criticizing the U.S. In fact, the publisher says, the Man of Steel remains as American as apple pie, baseball and small-town life.

"Superman is a visitor from a distant planet who has long embraced American values," DC's co-publishers Jim Lee and Dan DiDio said Thursday in a statement. "As a character and an icon, he embodies the best of the American Way."

And, they added, Superman, like his U.S. citizen alter-ego, Clark Kent, remains, "as always, committed to his adopted home and his roots as a Kansas farm boy from Smallville."