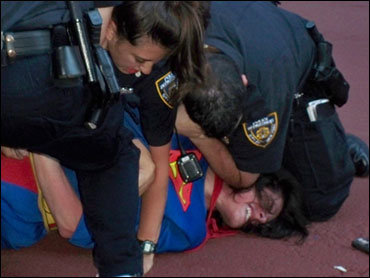 NEW YORK (CBS) The Times Square street performer, who was arrested last week in a Superman costume for assault and resisting arrest, has been arrested yet again for fleeing NYPD after a one-man protest.

"I feel that I need to save the world just like the real Superman," said Katsnelson dressed like the Man of Steel in a New York Post video.

Then the super-muscled super hero worked the Central Park West sidewalks in front of Trump Tower protesting the posh building because homeless people can't live there.

That's when Trump Tower officials decided to called the police.

Officers arrived at the scene and ordered the Man of Steel to get on the ground. Katsnelson proceeded to follow orders, but then made a break for it.

But not even Superman can outrun New York's finest. Cops apprehended the Man of Steel and arrested him.

"I'm Superman," he said during his arrest, as if the blue tights and red cape hadn't given him away.

Later Tuesday, he was charged during an arraignment with criminal trespass, disorderly conduct and obstructing government administration.

Katsnelson made his $1,000 bail and plans to sue the city, claiming he was beaten up by cops. At least they didn't beat him with kryptonite.