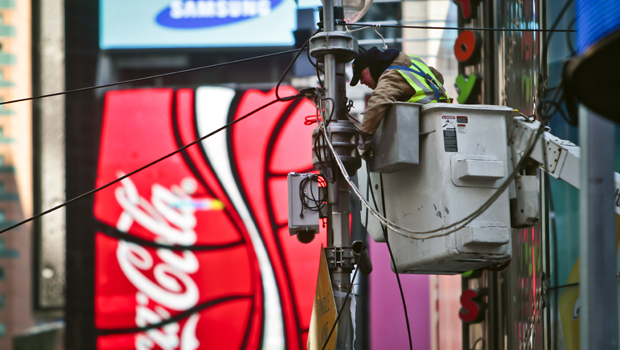 NEW YORK -- When Super Bowl fans fill the streets of New York City next week, police will be watching them closely - in person, in the air and on closed-circuit monitors.

The heavy surveillance is one facet of a vast security effort by scores of law enforcement agencies that spent the past two years devising their own version of a zone defense to protect Super Bowl events that are all over the map.

Security preparations began about four years ago, when MetLife Stadium was first awarded the Super Bowl, CBS News correspondent Terrell Brown has reported. Since then, security teams have gone to the last three Super Bowls taking a look at what went right and learning from what went wrong.

Manhattan and Brooklyn will be the scene of dozens of pre-game gatherings, while across the Hudson River, Newark will stage Media Day. Jersey City will host the Seahawks and Broncos at hotels there before the kickoff on Feb. 2 at MetLife Stadium in East Rutherford.

At a recent security briefing at the stadium, police chiefs and other officials said success will be measured in part by how well authorities conceal all the concern over potential threats.

The officials "realize this is the Super Bowl of football, not security," said Jeffrey Miller, the NFL's head of security. "That's why all of us have been working very hard to make sure we take care of the logistical and security concerns so the fans can come and relax and enjoy what they see on the field."

As a precaution, the officials have mostly declined to give specific details of the security plans. They've also refused to forecast the costs.

But at the briefing, the head of the New Jersey State Police revealed that up to 700 troopers would be assigned to patrols in and around the stadium. The NFL has committed another 3,000 private security officers to bolster security there as well.

In Manhattan, the NYPD will draw on its experience securing the annual New Year's Eve celebration in Times Square, the New York City Marathon, the U.N. General Assembly and other high-profile events. The department also has studied bombings and other attacks, both domestic and foreign, to fine tune its approach to guarding against potential terror threats.

"We're accustomed to large events and we're prepared to respond to anything that presents itself," said Chief James Waters, commanding officer of the NYPD's Counterterrorism Bureau.

Waters described how NYPD officials met with their counterparts in Boston following the bombing at last year's Boston Marathon to assess the risk of future attacks in similar settings. The NYPD responded by blanketing the finish line area of the city's own marathon with security cameras - an approach that will be duplicated along Super Bowl Boulevard.

"We took a close look at what happened in Boston," Waters said. "Unfortunately, this is the world we live in, so we learned from events around the world."

The temporary cameras for the Super Bowl festivities will supplement a system of thousands of permanent cameras covering midtown and Wall Street that the NYPD monitors from a command center in lower Manhattan. The department has pioneered analytical software that allows it to program the cameras to detect suspicious activity, such as a bag or other objects left in one place for a long time.

The NYPD also will take lower-tech measures similar to those taken for New Year's Eve, when hundreds of extra uniformed and plainclothes officers in Midtown and elsewhere will mix with the crowd.

Hazmat and bomb squads will be on standby. Others officers will patrol with bomb-sniffing dogs. Still more will watch from rooftops and from police helicopters.

The NYPD has advised hotels welcoming guests for the Super Bowl to remind their staffs to be on the lookout for anyone loitering in lobbies or guest floors. They also have recommended being suspicious of guests booking unusually long stays - a possible sign someone may be using a room as a staging area for conducting extensive surveillance or storing weapons.

FBI analysts will monitor the latest counterrorism intelligence the week of the game to watch for threats. There also have been reports that another federal agency, the U.S. National Nuclear Security Administration, used helicopters with radiation detecting technology to fly over parts of New York City and New Jersey and map naturally occurring radiation sources as a baseline to measure against possible dirty bomb or other rogue activity.

Jeffrey Strauss, a former New Yorker and San Diego restaurateur who's staying in the city and attending the Super Bowl, said he's thankful for the security. But he's more worried about the commute to the Meadowlands and the weather than any possible mayhem.

"I won't go to the game in fear," Strauss said. "I think I'll have a better chance of freezing to death than getting killed by a terrorist."