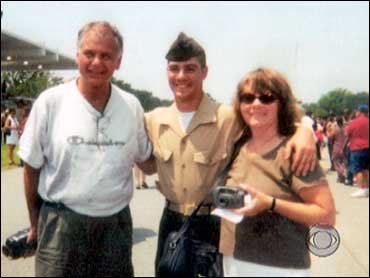 They are the casualties of wars you don't often hear about - soldiers who die of self-inflicted wounds. Little is known about the true scope of suicides among those who have served in the military.

"I just felt like this silent scream inside of me," said Jessica Harrell, the sister of a soldier who took his own life.

"I opened up the door and there he was," recalled Mike Bowman, the father of an Army reservist.

"I saw the hose double looped around his neck," said Kevin Lucey, another military father.

Keteyian spoke with the families of five former soldiers who each served in Iraq - only to die battling an enemy they could not conquer. Their loved ones are now speaking out in their names.

They survived the hell that's Iraq and then they come home only to lose their life.

Twenty-three-year-old Marine Reservist Jeff Lucey hanged himself with a garden hose in the cellar of this parents' home - where his father, Kevin, found him.

"There's a crisis going on and people are just turning the other way," Kevin Lucey said.

Kim and Mike Bowman's son Tim was an Army reservist who patrolled one of the most dangerous places in Baghdad, known as Airport Road.

"His eyes when he came back were just dead. The light wasn't there anymore," Kim Bowman said.

Eight months later, on Thanksgiving Day, Tim shot himself. He was 23.

Diana Henderson's son, Derek, served three tours of duty in Iraq. He died jumping off a bridge at 27.

"Going to that morgue and seeing my baby ... my life will never be the same," she said.

Beyond the individual loss, it turns out little information exists about how widespread suicides are among these who have served in the military. There have been some studies, but no one has ever counted the numbers nationwide.

"Nobody wants to tally it up in the form of a government total," Bowman said.

Why do the families think that is?

"Because they don't want the true numbers of casualties to really be known," Lucey said.

Sen. Patty Murray, D-Wash., is a member of the Veterans Affairs Committee.

"If you're just looking at the overall number of veterans themselves who've committed suicide, we have not been able to get the numbers," Murray said.

Watch more of Keteyian's conversations with the families.
FYI: Suicide Warning Signs and Getting Help.

CBS News' investigative unit wanted the numbers, so it submitted a Freedom of Information Act request to the Department of Defense asking for the numbers of suicides among all service members for the past 12 years.

Four months later, they sent CBS News a document, showing that between 1995 and 2007, there were almost 2,200 suicides. That's 188 last year alone. But these numbers included only "active duty" soldiers.

CBS News went to the Department of Veterans Affairs, where Dr. Ira Katz is head of mental health.

"There is no epidemic in suicide in the VA, but suicide is a major problem," he said.

Why hasn't the VA done a national study seeking national data on how many veterans have committed suicide in this country?

"That research is ongoing," he said.

So CBS News did an investigation - asking all 50 states for their suicide data, based on death records, for veterans and non-veterans, dating back to 1995. Forty-five states sent what turned out to be a mountain of information.

And what it revealed was stunning.

Dr. Steve Rathbun is the acting head of the Epidemiology and Biostatistics Department at the University of Georgia. CBS News asked him to run a detailed analysis of the raw numbers that we obtained from state authorities for 2004 and 2005.

One age group stood out. Veterans aged 20 through 24, those who have served during the war on terror. They had the highest suicide rate among all veterans, estimated between two and four times higher than civilians the same age. (The suicide rate for non-veterans is 8.3 per 100,000, while the rate for veterans was found to be between 22.9 and 31.9 per 100,000.)

"Wow! Those are devastating," said Paul Sullivan, a former VA analyst who is now an advocate for veterans rights from the group Veterans For Common Sense.

Eye to Eye: Watch more of Keteyian's interview with Sullivan.
Read the Investigative Unit's Data and Methodology behind this story.
Read part 2 of the investigative series.

"Those numbers clearly show an epidemic of mental health problems," he said.

"We are determined to decrease veteran suicides," Dr. Katz said.

"One hundred and twenty a week. Is that a problem?" Keteyian asked.

Is it an epidemic?

"Suicide in America is an epidemic, and that includes veterans," Katz said.

Do these numbers serve as a wake-up call for this country?

"If these numbers don't wake up this country, nothing will," she said. "We each have a responsibility to the men and women who serve us aren't lost when they come home."

"The report that the rate of suicide among veterans is double that of the general population is deeply troubling and simply unacceptable. I am especially concerned that so many young veterans appear to be taking their own lives. For too many veterans, returning home from battle does not bring an end to conflict. There is no question that action is needed."

Former prosecutor on why FBI search of Trump's Mar-a-Lago is "high-stakes"
Thanks for reading CBS NEWS.
Create your free account or log in
for more features.
View CBS News In
CBS News App Open
Chrome Safari Continue
Be the first to know
Get browser notifications for breaking news, live events, and exclusive reporting.