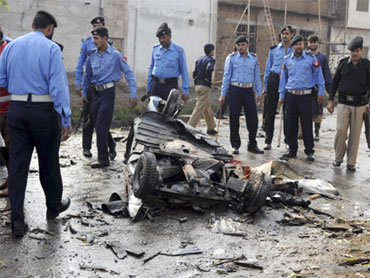 A suicide bomber in a rickshaw detonated his explosives near a group of police constables in northwest Pakistan's main city of Peshawar, killing three people Monday, police said.

The attack was the latest in a string of strikes that have killed more than 300 people over the past six weeks. The bloodshed appears aimed at distracting the government from its offensive against the Taliban in the South Waziristan tribal region.

Five other people were wounded in the blast at Pathang Intersection on the well-known Ring Road around the city, police official Shaukat Khan said. TV footage showed a crane lifting the rickshaw's carcass to clear the road.

The bomber was likely heading to a more crowded area but decided to set off his explosives when police stopped the rickshaw to check it, senior Peshawar police officer Liaquat Ali Khan said.

The attacker killed a police constable, the rickshaw driver and a passer-by, police said.

"Despite all the security arrangements you cannot stop one who is bent upon killing himself and others," said Sahibzada Anis, a local government official. "Our police are rendering their lives to save citizens but these kinds of incidents are hard to stop."

Peshawar has been struck several times during the recent surge of strikes. A late October explosion in the city leveled a market, killing around 112 people in the deadliest attack to hit the country since 2007.

The government has pledged to press ahead with the offensive in South Waziristan despite the assaults. The U.S. supports the operation because Pakistan's tribal belt is home to many militants involved in attacks on Western troops across the border in Afghanistan.

Pakistan's army has pitted some 30,000 troops against up to 8,000 militants, including many Uzbeks and other foreign insurgents who have long taken refuge in the lawless tribal areas.

The soldiers have been battling militants in three key Taliban bases in South Waziristan over the past few days. The latest fighting Sunday killed 20 militants and wounded eight soldiers, an army statement said.

The information is impossible to verify independently - Pakistan has blocked access to the battlezone.