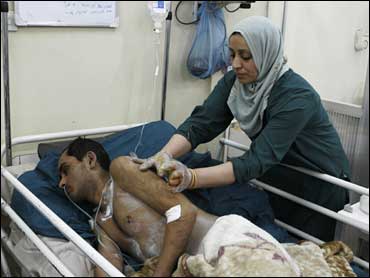 The troops likely will be removed from Baghdad and Anbar province - once the main battlefields of the war.

All 4,000 British soldiers in southern Iraq are also slated to leave by September.

A U.S. spokesman, Maj. Gen. David Perkins, said Iraq's security has "greatly improved, and it has moved from a very unstable to a stable position." He cited a 90-percent drop in violence that he called its lowest level since the summer of 2003.

Perkins described Sunday's attack, the worst in Baghdad in months, as a sign that U.S.-led coalition forces have militants on the run.

"We are by no means complacent," Perkins told reporters at an afternoon Baghdad news conference. "We know that al Qaeda, although greatly reduced in capability and numbers, still is desperate to maintain relevance here in Iraq."

Several hours earlier, the suicide bomber detonated his explosives as he drove his motorcycle into a group of people, many of them police recruits, waiting near a side entrance of Baghdad's main police academy in a mainly Shiite area of the city.

Iraqi and U.S. forces sealed off the scene, allowing only ambulances and fire engines to enter. Nervous Iraqi troops fired in the air to prevent onlookers and reporters from getting too close.

Haitham Fadhel said he was standing in one of three lines of recruits arriving for their first day of special guard training courses at the academy. He was knocked unconscious and was wounded by shrapnel, but called himself lucky. Two of his friends were killed.

"We were feeling secure as we were waiting in a well-guarded area," said Fadhel, 24, from the mainly Shiite neighborhood of New Baghdad. "Before the explosion occurred I heard a loud shout saying 'Stop, stop, where are you going?' Seconds later, a huge explosion shook the area.

"I am just wondering how a big security breach can occur in such a secured area." 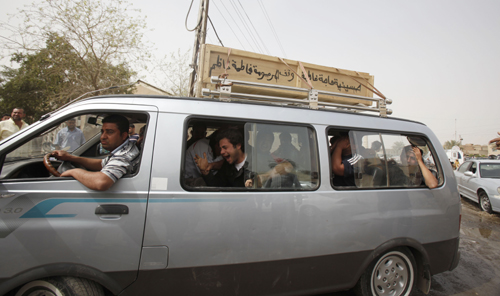 (Grieving relatives drive away with a coffin containing the body of a policeman killed in a suicide bombing outside the police academy in Baghdad, March 8, 2009.)

No group claimed responsibility for the blast but suicide bombings are the signature attack of Sunni religious extremists, including al Qaeda.

The heavily fortified academy has been hit by several bombings. A Dec. 1 suicide bombing there killed at least 33 people and wounded dozens, including four U.S. soldiers and an Iraqi general.

Iraqi officials provided conflicting casualty tolls Sunday, as is common in the chaotic aftermath of bombings.

Three medical officials and one police officer in the area where the bombing occurred said 32 people were killed, including 19 recruits, nine policemen and four traffic police, and about 60 others were wounded.

Another police officer said 28 were killed. The officials spoke on condition of anonymity because they weren't authorized to release the information.

Extremists increasingly have targeted Iraqi forces as they take over the country's security so American troops can go home. Last week, President Obama announced the end of all combat missions in Iraq by the end of August 2010, leaving up to 50,000 U.S. soldiers to train and assist Iraqi security forces. All U.S. troops are to leave Iraq by the end of 2011.

Currently there are about 135,000 U.S. troops in Iraq, and their withdrawal will be gradual at first to leave most in place for parliamentary elections at the end of this year. Units due to leave Iraq at the end of their deployment will not be replaced.

The 4,000 British troops due to leave are the last British soldiers in Iraq.

Iraqi government spokesman Ali al-Dabbagh said Iraqi army and police are not yet ready to protect the nation from extremists.

"We need some time," al-Dabbagh said. "By the end of 2011, Iraqi security forces should be able to provide security for the country and the people."

In the meantime, Perkins said the remaining U.S. forces after the 12,000 Army soldiers and Marines leave in September will be spread out to make sure Iraq continues to be protected. That will be done in coordination with Iraqi authorities, he said.

The troop withdrawals will reduce U.S. combat power from 14 brigades to 12 along with some supporting units. The U.S. also plans to turn over 74 facilities and areas under its control to the Iraqis by the end of March as part of the drawdown.
By Associated Press Writer Lara Jakes; AP writers Sinan Salaheddin and Sameer N. Yacoub contributed to this report