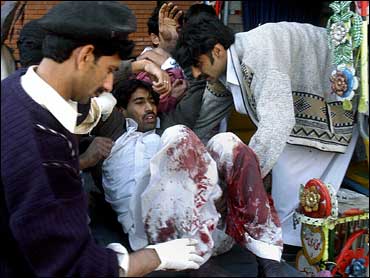 A suicide attacker detonated a bomb packed with ball bearings and nails amid hundreds of holiday worshippers Friday at the home of Pakistan's former interior minister, killing at least 50 people, authorities said.

It was the second suicide attack in eight months apparently targeting Aftab Khan Sherpao, who escaped injury. One of his sons was wounded.

Suspicion will likely focus on the pro-Taliban or al Qaeda militants active in the northwestern region of the country where the attack occurred.

Hours after the bombing, security officers raided an Islamic school in the nearby village of Turangzai and arrested seven students, some of them Afghans, two police officials said, speaking on condition of anonymity because they were not authorized to talk to the media. The officials declined to say whether the raid was connected to the attack.

The attack also deepened the sense of uncertainty in Pakistan as it heads into Jan. 8 parliamentary elections.

"This attack (on Friday) may well be an indication of more such attacks in the pipeline" said one Pakistani security official who spoke to CBS News on the condition of anonymity. The official said recent intelligence suggested al Qaeda was actively encouraging its local partners in Pakistan "to raise the intensity of its operations."

The bombing, which came during the Islamic holy day of Eid al-Adha, left a scene of carnage at the mosque at Sherpao's residential compound in Sherpao, a village 25 miles northeast of the city of Peshawar.

Bloodied clothes, hats, shoes and pieces of flesh were strewn about the building. Witnesses said the dead included police officers guarding Sherpao, who was praying in the mosque's front row at the time of the attack but not injured.

"We were saying prayers when this huge explosion occurred," said Shaukat Ali, a 26-year-old survivor of the blast whose white cloak and pants were torn and spattered with blood.

The bomber was praying in a row of worshippers when he detonated the explosive, provincial police chief Sharif Virk said. Hundreds of people were in or around the mosque, about 40 yards from Sherpao's house, witnesses said.

District mayor Farman Ali Khan said between 50 and 55 people were killed, and authorities were collecting information on their identities. Local police chief Feroz Shah said over 100 were wounded.

The hospital in Peshawar was wracked with chaos as the injured arrived in pickup trucks, ambulance sirens wailed and wounded screamed for help. The bomb contained between 13 and 17 pounds of explosives and was filled with nails and ball bearings to maximize casualties, said the head of the bomb unit at the scene, who declined to give his name.

A bulldozer was brought in to dig graves for the dead next to the mosque. Other volunteers used shovels.

Iqbal Hussain, a police officer in charge of security at the mosque, said all those who entered had been made to pass through a body scanner and were searched with metal and explosive detectors.

However, Hamid Nawaz, the current interior minister, maintained there was no security lapse.

"All possible care had been taken, there was no lapse as such ... but such an incident can happen at such a gathering," Nawaz said on Aaj TV.

After the blast, Sherpao's house was protected by about a dozen armed police and paramilitary troops.

In a brief telephone interview with The Associated Press, Sherpao said he was unhurt. "Yes, I'm fine."

Sherpao was interior minister - Pakistan's top civilian security official - in the administration recently dissolved ahead of January parliamentary elections. He is head of the Pakistan Peoples Party-Sherpao, and is running as a candidate for parliament in next month's elections.

President Pervez Musharraf condemned the blast and directed security and intelligence agencies to track down the masterminds, the state Associated Press of Pakistan reported.

In April, Sherpao was slightly wounded by a suicide bomber. Most of victims were local people, but the dead included several of Sherpao's police bodyguards, he said.

Islamic militants have repeatedly targeted top figures in the government of Musharraf, a key ally in the U.S.-led war on terror. Musharraf himself narrowly escaped assassination in two bombings a few days apart in December 2003 near Islamabad.

Taliban and al Qaeda fighters have extended their influence over tracts of Pakistan's volatile northwest in the past two years and in recent months have launched numerous suicide attacks, usually targeting security forces and their families.

The army says the most recent attacks could be retaliation for a military operation against militants in the Swat valley, where it claims to have killed about 300 militants since last month.

The wave of violence comes as Pakistan struggles to emerge from months of political turmoil.

Musharraf recently declared emergency rule for six weeks - a move he contended was necessary to combat rising Islamic extremism, although it was widely seen as a move to prolong his own presidency. Thousands of his opponents were rounded up and Supreme Court justices fired.

On Friday, police rearrested Aitzaz Ahsan, a prominent opposition lawyer, according to his son, Ali Aitzaz.

Aitzaz Ahsan has been at the forefront of a lawyers' protest movement against Musharraf's rule.