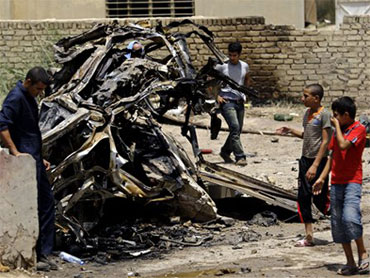 Iraqi officials say a suicide attack has struck a crowd in Saddam Hussein's hometown of Tikrit, raising to at least 33 the number of people reported killed in bombings on Sunday.

Police and hospital officials say five people were killed and 12 wounded by the 10 p.m. local time bombing in the northern city of Tikrit. The attack occurred hours after a double suicide bombing targeting a trade bank in Baghdad that killed at least 28 people.

The officials, who spoke on condition of anonymity because they weren't authorized to release the information, say the Tikrit bomber was among the crowd that gathered after the initial attack.

A wave of violence has raised concerns insurgents are taking advantage of political deadlock after inconclusive elections to foment unrest.

The latest violence began when bombers drove two cars packed with nearly 180 pounds of ammonium nitrate toward the gates of the Trade Bank of Iraq building in Baghdad and detonated the explosives after striking the surrounding blast walls, said Iraqi military spokesman Maj. Gen. Qassim al-Moussawi.

The attacks added weight to warnings that insurgents would try to foment unrest as politicians squabble over forming a new government more than three months after inconclusive national elections.

The explosions capped a week in which about 100 people were killed in bombings and shootings nationwide, including at least 26 who died in a commando-style assault against the central bank in Baghdad last Sunday. An al Qaeda in Iraq front group, the Islamic State of Iraq, claimed responsibility for that attack, saying it targeted the institution responsible for funneling "oil money and the stolen wealth of Muslims" to the West.

Sectarian bloodshed that pushed the country to the brink of civil war in 2006-2007 has dropped sharply after a series of U.S.-Iraqi offensives, a Sunni revolt against al Qaeda and a Shiite militia cease-fire. But Iraqis still face near-daily attacks.

Many are venting their anger at politicians for failing to choose a prime minister and form a government, even though the new parliament was seated last week. Prime Minister Nouri al-Maliki has been acting in a caretaker role as he battles to keep his job after a rival Sunni-backed political bloc won a narrow victory in the March 7 parliamentary vote.

The head of the Iraqiya bloc, Ayad Allawi, has warned more violence could ensue if the Sunnis who backed him feel sidelined by a Shiite alliance between al-Maliki's party and a hard-line religious group.

"Ordinary Iraqis are paying the price of the political struggle in Baghdad," he said.

Hassan al-Janabi, a 44-year-old hotel employee in Baghdad, said he has altered his routine to avoid crowded areas and rush hour traffic, which have been popular targets for insurgents seeking to maximize casualties.

"I believe the deteriorating security situation is connected to the political struggle and the fight between politicians over power and government," he said. "I think that attacks will increase because regional countries will increase their interference in Iraq after the upcoming withdrawal of U.S. forces."

The ability of insurgents to penetrate areas with tight security has raised questions about the readiness of Iraqi forces to take over their own security less than three months before all American combat troops are to leave the country, the first step toward a full withdrawal by the end of next year.

The Trade Bank of Iraq is in a commercial area surrounding Nisoor Square that includes a government agency that issues national identification cards and the telephone exchange building. Established after the 2003 U.S.-led invasion, the bank is at the forefront of efforts to attract foreign investment.

Bank chairman Hussein al-Uzri said five guards were among the dead and six others were wounded. He blamed the attack on insurgents trying to undermine Iraq's progress and promised they would fail.

"The work of building Iraq's economic strength ... goes on uninterrupted, as does the work of the bank, which will be open for business tomorrow," he said in a statement Sunday.

In other violence, police and morgue officials said the decomposed bodies of six women and a man were found buried in the backyard of a deserted house in the religiously mixed Zayouna neighborhood in eastern Baghdad. The seven victims apparently were killed two to three months ago, the officials said.

Iraqi women are frequently killed by religious extremists who accuse them of behavior deemed un-Islamic.

Hospital officials also said a man wounded after police opened fire at a protest over power cuts in the southern oil hub of Basra had died, raising the number of demonstrators killed to two. The violence Saturday highlighted growing public anger over a lack of basic services in Iraq.

The officials all spoke on condition of anonymity because they weren't authorized to release the information to the media.

Al-Maliki has dispatched a team to Basra to address the problem.

Political rival Allawi called the protest a spontaneous outpouring of discontent and called for restraint from Iraqi security forces in a televised speech broadcast on the private Al-Sharqiyah TV station.

"Regretfully what happened formed a black mark in the march of Iraq toward prosperity and development as well construction and stability," he said.