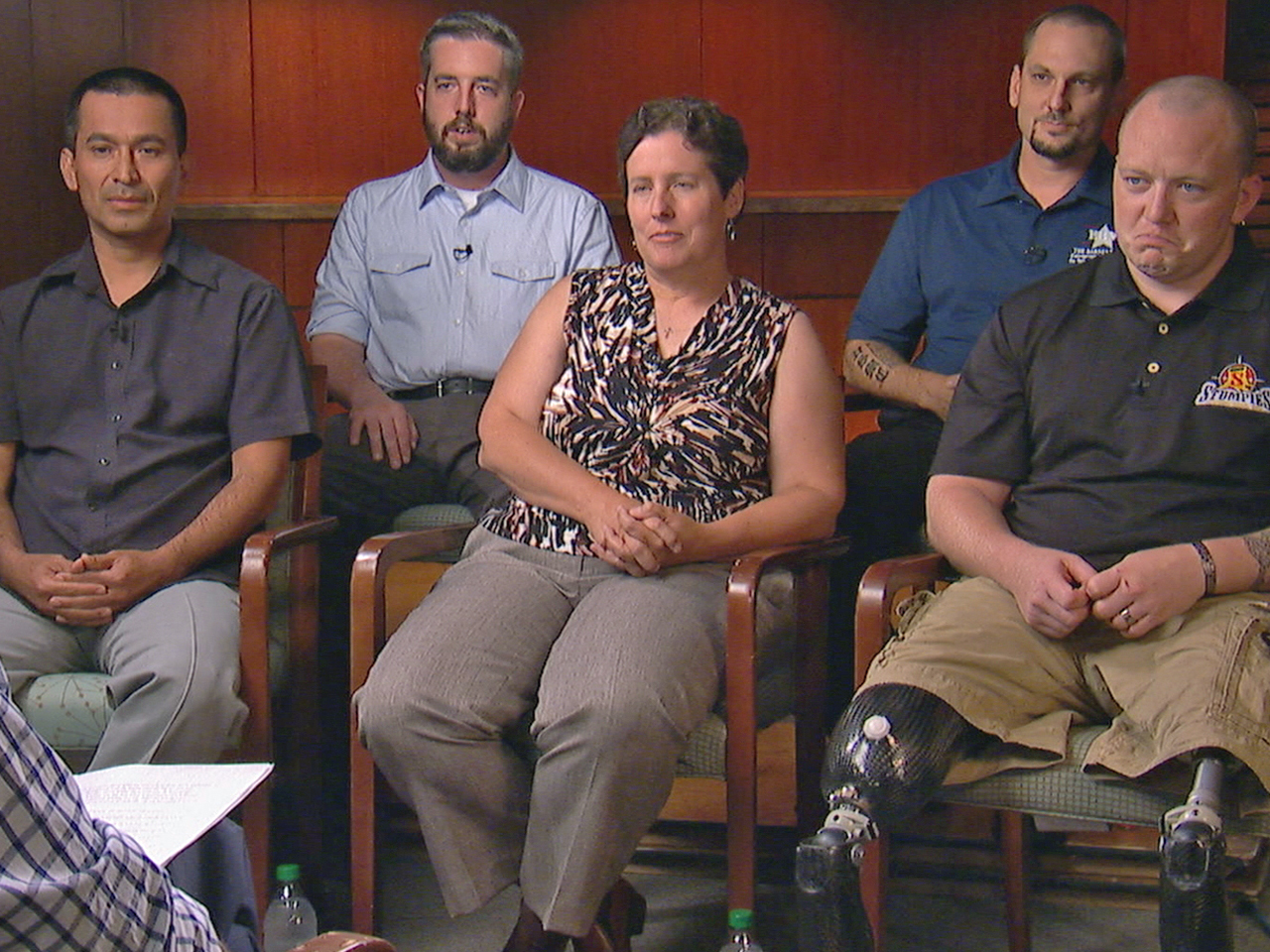 The following script is from "Succeeding As Civilians" which aired on May 12, 2013. Dr. Sanjay Gupta is the correspondent. Sumi Aggarwal, producer.

In January, Walmart pledged to hire any recent veteran who wanted a job - the company projects that could be 100,000 vets in the next five years. That's a big commitment at a time when it's needed.

There are three million Americans who have served in Iraq and Afghanistan and they face a host of problems when they come home. It's not just unemployment, nearly half have a disability because of their service. Most tragically, more soldiers killed themselves last year than died at the hands of the enemy.

One veteran turned business school professor has an innovative solution to help them succeed as civilians: give the vets a new mission -- business ownership. Funded in part by Walmart, PepsiCo and other companies, he started a small business incubator, tailor-made to help disabled vets trade in their combat boots for business suits.

For his deployments in Afghanistan, this young father and husband volunteered for the bomb squad unit.

Brad Lang: Every time an IED is rendered safe, you saved countless lives. I joined the Marine Corps to serve. And this is, in my opinion, the ultimate way to serve is to save your brothers' lives.

Sanjay Gupta: These are the things everyone wants to avoid. And you guys are the guys that are actually going toward those things.

In July 2011, while under fire, Lang defused two IEDs, but as he was leaving the scene, he missed one and triggered it.

Brad Lang: I remember the cloud of dust, flying through the air upside down, landing on the ground. I knew that I was in pretty rough shape.

Sanjay Gupta: When you surveyed your body, what did you see?

He was airlifted out and weeks later when he woke up at Walter Reed, the 27-year-old and his family faced their new reality.

Brad Lang: We got over the fact that I lost my legs very quickly.

Sanjay Gupta: I think it would take me a long time to get to that point.

Brad Lang: Everything becomes trivial when you go through an experience like this.

Brad Lang was awarded a Purple Heart and underwent more than 20 operations. During his months in the hospital, he reconnected with a Marine he had met during training, Johnny Morris, who had also lost a leg. Knowing their job prospects were slim, they decided to start a business, building guns and also adapting them for the disabled.

Brad Lang: We both just love guns. Johnny was a gunsmith before he came in the Marine Corps. We just decided that that would be a great idea. We plan to be a retail gun store selling factory guns, but with full gunsmithing capabilities.

Sanjay Gupta: You came up with a name.

Brad Lang: We were just kinda joking around and discussing, you know, "What are we going to call this place?" And my wife looked at me, and she goes, "Stumpie's, duh. You only have one good leg between the two of you."

But they didn't know how to make Stumpie's a reality and that's where the entrepreneurship bootcamp for veterans comes in.

[Mike Haynie in classroom: One thing I am going to ask of you this week is make the most of this opportunity.]

It's a crash course in business: everything from keeping the books, to understanding the competitive landscape, to getting financing.

Mike Haynie: As far as I'm concerned, who better to live the American dream of business ownership than these men and women who have put on a uniform to defend that dream.

Mike Haynie, an Air Force vet turned entrepreneurship professor, started the bootcamp for veterans in 2006. It's a month-long online course, followed by a 10-day, all-expenses paid program, that's offered on eight campuses nationwide, including this one at Syracuse University.

Sanjay Gupta: You really treat them like-- I mean, business executives. Take them out shopping for suits and ties. They stay in hotels as opposed to dorms. What's the significance of that?

Mike Haynie: I want to begin to help them change who they-- who they perceive they are. You also have to create a new-- that new narrative, that new vision for, you know, "I am an entrepreneur. I am a business owner."

Marine Lance Corporal Garrett Anderson wanted to start a production company when he applied. While everyone in the class has a disability, Anderson's wounds are less visible. He's one of the approximately 600,000 vets suffering from post-traumatic stress disorder.

He was just 19 when he fought in Fallujah, one of the deadliest battles of the Iraq war. It haunted him.

Garrett Anderson: One night, I got pretty intoxicated. Later that night, I tried to hang myself. And I failed at that. And after I'd failed at that I realized in a real way like, "Hey, you-- you didn't come home OK. You've got a problem and it's because of the war."

More than 22 veterans kill themselves every day that's almost one an hour.

Sanjay Gupta: Has someone or something failed?

Mike Haynie: Yeah, no question. I mean, it's-- how do we let that happen?

Sanjay Gupta: Is that in part what-- what drives you?

Mike Haynie: I feel-- an obligation to support the men and women who-- who have shouldered the burden of-- of a decade at war. They stepped up. They volunteered.

[Mike Haynie: How many of you in your military roles have had those people you work for...]

Nearly half of those returning are coming home with disabilities, which can make it difficult to hold traditional 9-t0-5 jobs.

Sanjay Gupta: Are veterans particularly good at being entrepreneurs?

Mike Haynie: Absolutely. You learn to become entrepreneurial in the context of serving in the military. The boss comes up to you and says, "Here's what we need you to accomplish. It's got to be done in two days. Figure it out."

Seventy percent of the vets who entered his program started a business within four years. Nine grads are running multi-million dollar businesses, including a technology company that had revenues of more than $40 million.

Pam Randall didn't dare dream about that kind of success.

Pam Randall: I was shocked when I couldn't even get menial labor jobs.

She was a lieutenant colonel in the Air Force and retired in 2010 after years of hard landings left her with a laundry list of ailments.

Pam Randall: Damage to both shoulders, both wrists, both hips, both knees, upper and lower back, and I have nerve damage in my elbows.

Sanjay Gupta: Are you in pain?

Though it was a challenge, she spent more than a year looking for work, any kind of work.

Sanjay Gupta: Years of military service, a lieutenant colonel, senior rank. It seems like you would be the perfect candidate for so many jobs.

Pam Randall: You'd think that. You would think that. The military chapter's closed. So now you do a new chapter.

Sanjay Gupta: What was your sentiment as you're going through that? A year of putting out applications and not being able to find anything.

Pam Randall: I was a little shocked. I had to do something. So now, you know, small business, here we come.

Randall wanted to turn her leatherworking hobby into a saddle and tack business. She turned to the bootcamp for help.

Pam Randall: I've got the craft side. It's that whole business world, all that business stuff, that I knew absolutely nothing about.

Randall, Lang, Anderson and two dozen other vets were in this year's class. Early on in the program, most of them didn't see themselves as entrepreneurs.

Sanjay Gupta: Just by a show of hands, how many of you, before you joined the military, ever thought at some point in your life you'd start a business of your own? You thought you might?

Sanjay Gupta: But you're the only one. Is it scary?

Sanjay Gupta: What frightens you the most about this?

Garrett Anderson: --you do this wrong, and you can mess up your whole life. You know, it's--

Garrett Anderson: If you go too far too quick, your credit's ruined. You know, you got a family and what are you gonna do?

[Ted Lachovitz lecture: Failure seldom stops you from being an entrepreneur. What stops you is because you have the fear of failure.]

It's bootcamp, minus the mud - the challenges are mental, not physical and the vets lean on each other for support.

Pam Randall: You gel quickly when you're a vet. You have a common ground that you just-- it's hard to explain what it is, but you just instantly will click.

Alan Beaty: I think it would be difficult. I wouldn't want to do it unless it was a school of vets.

The final exam is a presentation of their business plan to a panel of executives and entrepreneurs.

[Mike Haynie from graduation: I would like to introduce the 2012 Entrepreneurship Bootcamp for Veterans with disabilities program here at Syracuse University.]

To date, only 600 veterans have gone through the program. It's numbers like that that frustrate Mike Haynie.

Mike Haynie: Sometimes I go home at night and I think about-- "Man, there's 26 vets here." And there's 20,000 that will leave the military this month. You know, it's spitting in the wind. There's so much more we could do.

Mike Haynie: If the agenda is empower vets through business ownership, why would you not go out to the people who are really good at helping individuals launch and grow businesses and say, "Become our partner?"

That's slowly starting to happen - the government, which already provides veterans with small business loans, has asked Haynie to help design coursework for all returning troops.

One of the most important parts of the program is the long-term access to mentorship, contacts and a variety of free services.

In the nine months since graduation, a few have already launched businesses.

One opened a law firm. Another, a cross fit gym. Pam Randall started Lladnar's Leathercrafts and sold several horse halters. Garrett Anderson, who started that production company, is finishing his first documentary and he got married.

Sanjay Gupta: You're taking a lot on this year, aren't you?

Sanjay Gupta: You feel good about it all?

{Brad Lang in shed: Oh there's that piece I was looking for...]

Brad Lang and Johnny Morris launched their gun business out of a shed in the backyard.

[Johnny Morris: After eight shots, the magazine ejects from the top.]

They got their federal firearms license, are looking for investors and have already sold more than a hundred guns.

Sanjay Gupta: All right. I think I'm gonna try this?

Brad Lang: All right. Let's do it.

The new proprietors of Stumpie's gave me a lesson at a shooting range using one of their custom made rifles...

Brad Lang: All right. You're clear to fire--

Sanjay Gupta: I'm gonna give this a go?

Brad Lang: You're clear to fire.

Sanjay Gupta: Here we go? (gunshot) How'd I do?

Brad Lang: Like, actual check that said Stumpie's Custom Guns on it. So-- you know, it's neat.

Brad Lang: Yeah. And take pictures of that stuff. You're like, "Yeah."