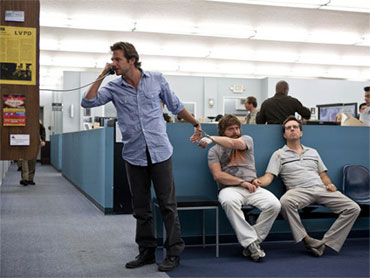 NEW YORK (CBS) Australian stunt actor Scott McLean is in a coma after a car crash while filming a high-speed car scene for the sequel "The Hangover Part II."

Warner Bros., which is distributing the movie, confirmed to The Hollywood Reporter that the accident took place Dec. 19 in Thailand and that the actor is being treated at a hospital in Bangkok.

"There was an accident involving a truck and a car on the second unit set of 'The Hangover Part II' near Bangkok, Thailand, at approximately 3:00 a.m. on Friday, Dec. 17, 2010 (Bangkok time). A stuntman was injured during the filming of this sequence," the statement from Warner Bros. read.

"The truck and car were both driven by stunt drivers. An ambulance immediately took the injured stuntman to the local hospital, and he has since been transported to a hospital in Bangkok, where advanced care is being provided. We are awaiting further details concerning his condition."

No further details were available from the company, but a production source confirmed to THR that McLean was in an induced coma through sedation meant to help him recover from the incident.

The Todd Phillips movie, set for a May 2011 release, is a sequel to his summer 2009 blockbuster. It reunites actors Bradley Cooper, Zach Galifianakis, Justin Bartha and Ed Helms.