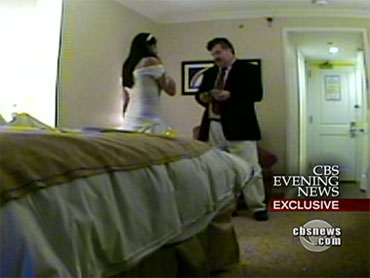 About 1,000 American-born children are forced into the sex trade in Ohio every year and about 800 immigrants are sexually exploited and pushed into sweatshop-type jobs, a new report on human trafficking in the state said Wednesday.

Ohio's weak laws on human trafficking, its growing demand for cheap labor and its proximity to the Canadian border are key contributors to the illegal activity, according to a report by the Trafficking in Persons Study Commission.

"Ohio is not only a destination place for foreign-born trafficking victims, but it's also a recruitment place," said Celia Williamson, an associate professor at the University of Toledo who led the research.

Formed last year by Ohio Attorney General Richard Condray, the commission also found that hundreds more in the state are at risk of being forced into sex trafficking or to work against their will in fields, restaurants, sweatshops or constructions sites.

Nationwide, between 45,000 and 50,000 people are trafficked into the United States, according to a 2001 report by the U.S. State Department. But Williamson noted that the problem is hard to quantify because of the underground nature of human trafficking, and studies often rely on estimates. Even the Ohio study, which analyzed law enforcement and government databases, is limited, she said.

A special report last year by CBS Evening News anchor Katie Couric examined the worrying trend in the U.S. of more American children and teens being lured into the sex trade.

"This is not the kind of problem America thinks it is," Ernie Allen of the National Center for Missing and Exploited Children told Couric.

Allen said prostitutes in this country are younger than ever, and they no longer all come from impoverished or broken homes.

"What we are seeing now is an increasing number of middle class kids and up - many of whom do it originally on a dare, or because they think it is interesting or different. And then find themselves trapped," Allen said.

Cordray said the new report establishes the scope of the problem in Ohio as authorities discuss ways to combat it.

From 1990 to 2000, Ohio's foreign-born population increased 30 percent, and the state has a growing pool of legal and illegal immigrants who draw victims or hide victims, Williamson said. These networks are highly organized, with brothels fronting as legitimate businesses.

Also, Toronto's airport is an arrival destination for international victims who are trafficked in Canada and transported to other cities, helping make Toledo, about 55 miles southwest of Windsor, Ontario, rank fourth in the U.S. in terms of arrests, investigations and rescue of domestic child-sex victims, the report said.

Only Miami, Portland, Ore., and Las Vegas had more.

A federal investigation into a child prostitution ring in Harrisburg, Pa., exposed Toledo as a center for the trade in 2005. Nine local girls were sold as sex slaves as part of the ring, and at least 12 of the 31 people charged had ties to Toledo.

Ohio does not have a stand-alone human trafficking law. Instead, it allows prosecutors to attach a human trafficking specification to related crimes that increase prison sentences - just as penalties are more severe if a crime involves a firearm.

According to the report, 42 states with tough human trafficking laws can bring serious charges. Offenders in Delaware, Montana, New Mexico and New York may face up to 100 years in prison, for example.

The report said that besides weak state laws in Ohio, law enforcement agencies often don't recognize human trafficking when responding to reports of illegal activity. For example, Ohio is quick to label child prostitutes as delinquents and to incarcerate them, rarely looking further at the adults involved, Williamson said.

The report recommends handling child trafficking cases through the child welfare system rather than the juvenile courts.