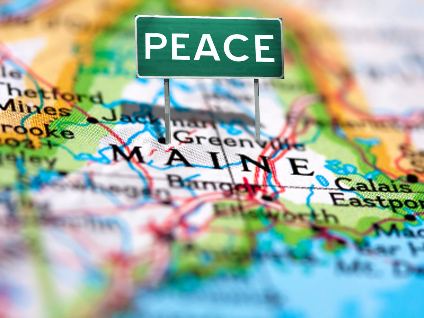 In the first-ever state ranking of peace in the United States, the Institute for Economics and Peace found that Maine was the most peaceful state in the country, while Louisiana came in last.

The international think tank, which also issues an annual Global Peace Index, found that the United States is 8 percent more peaceful in 2009 than it was in 1995.

The United States Peace Index defines "peace" as the "absence of violence."

To determine the rankings, the index looked at factors including homicide rates, violent crimes, percentage of the population in jail, number of police officers and availability of small arms.

The Index also estimates the "total cost of violence" for each state which reflects the cost of correctional and policing services, judicial system and medical costs associated with violent crime and homicide, and lost productivity and wages. In Maine, that total cost per person is $656; in Louisiana it is $2,458.

Regionally, southern states were the least peaceful, and states in the northeast were the most peaceful. During the years examined, New York experienced the most significant increase in peace, because violent crime dropped as well as incarceration rates. California and Texas also had increases in peace since 1991, while North Dakota, South Dakota and Montana saw the largest declines.

The ranking also found that peace was significantly correlated to economic opportunity, education and health, but is politically neutral - neither Republican nor Democratic states had an advantage.