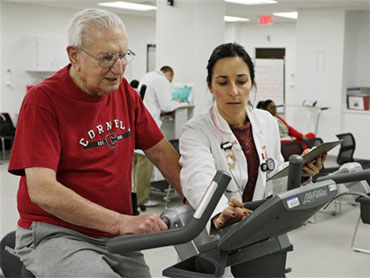 If you've had a heart attack or a bypass operation, there's an easy way to help prevent another one: stick with rehab.

People who get all 36 sessions of cardiac rehabilitation that most Medicare plans cover are less likely to die or suffer a heart attack in the next three to four years than people who have fewer sessions, a new study finds.

The research could encourage the multitudes of heart patients who don't follow doctors' orders to heed their advice. Only about one-fifth of heart patients even try rehab. Of those who do, few get all the sessions that are recommended.

The new study is one of the first big efforts to look at how survival is affected by the "dose" of rehab that heart patients get. Researchers saw a clear trend in this 65-and-older group.

"What this study shows in a very convincing manner is that the more sessions a cardiac patient goes to, the better off they are," said Dr. Stanley Hazen, preventive cardiology and rehabilitation chief at the Cleveland Clinic.

He had no role in the study, which was led by Duke University scientists and published online Monday in Circulation, an American Heart Association journal. Federal grants paid for the work.

Say "rehab" and many people envision weak heart patients being pushed to run on a treadmill. Exercise is crucial, but "they don't need to be grimacing and jogging around the track," Hazen said. "It can be just a brisk walk or swimming or a stationary bike. That's the key: find something you enjoy and are willing to do."

Many patients find they enjoy the counseling, he said. For some, it's the first time anyone has explained the "how-to" of healthy living.

"After you've been hospitalized and somebody then talks to you about these lifestyle changes, it might be more likely to sink in. It's the teachable moment," Hammill said.

His study used records on more than 30,000 Medicare recipients who went for at least one rehab session after being hospitalized for a heart attack, a bypass operation, or chronic and severe chest pain due to clogged arteries.

More than three years later, 18 percent of those who attended fewer than 12 cardiac rehab sessions had died versus 11 percent of those who went to all 36 sessions. After taking into account age and other differences in these groups of patients, that works out to a 47 percent reduction in the risk of death for those attending 36 sessions. Heart attacks also were less common in that group.

There was a strong trend: as the number of classes went up, the risk of having a heart attack or dying in the next few years went down.

Surprisingly, only 18 percent of study participants went to all 36 sessions, even though Medicare - the government health care program for those 65 and over - was footing the bill. Researchers don't know why so few stuck with it.

"It can be everything from the time required multiple times a week for so long, or transportation issues. Or it may just be that they feel better and don't feel the need to finish," Hammill said.

That's the case with Tony Rugare, an 84-year-old Cleveland area man who had a quadruple bypass operation in October. He attended his fourth rehab class on Monday and plans to do only a dozen more.

"It's a hassle getting here and parking," he said. Once he's had 16 classes, "by that time I think I know what to do and can go on my own."

However, it could be that sicker patients drop out of rehab sooner, Dr. William Weintraub wrote in an editorial in the journal. He is a heart specialist at Christiana Care Health System in Newark, Del. Because the study can't account for why people went to fewer or more sessions, it cannot prove that rehab alone accounted for better survival, he wrote.

But there's good reason to believe it did: researchers did a separate analysis on only folks who went to at least six sessions and still saw the trend of fewer heart attacks and deaths with greater attendance.

Dorothy Roberts went to her seventh session at the Cleveland Clinic on Monday. She walks on a treadmill and is trying to quit smoking. Roberts, 62, said that her artery-opening angioplasty procedure was a "very scary" experience, so she plans to complete all 36 rehab sessions covered by her private insurer.

"If you have a second chance at life, you do what you can to stay here," she said.