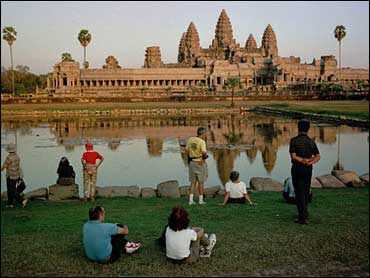 A new study of the demise of the ancient city of Angkor is a wake-up call for Cambodia to be more vigilant in its efforts to conserve the site, an official said Wednesday.

The study, in this week's online edition of the Proceedings of the National Academy of Sciences, found that Angkor was far larger than previously thought, incorporating an elaborate water-management network of nearly 400 square miles and rice paddies to feed more than 1 million people.

Researchers discovered, however, that the complex was too vast to manage and could have contributed to the civilization's decline. The extending rice fields resulted in serious ecological problems, including deforestation, topsoil degradation and erosion.

Soeung Kong, deputy director-general of the government agency managing the site, said that what happened to ancient Angkor "appears to be repeating itself now" due to overexploitation from tourism, highlighting the current challenges in managing and conserving the temples.

"The findings are eye-opening for us. They awake us to a greater need for safeguarding (the ancient city)," he said.

The study, led by Damian Evans of Australia's University of Sydney, revealed that Angkor was "the world's most extensive pre-industrial low-density complex" during its zenith between the 9th and 14th centuries — far larger than previously thought.

Using airborne imaging radar data acquired in 2000 by NASA, the researchers produced a "comprehensive and up-do-date" digital map of the area, which has been long obscured by jungle. They detailed tens of thousands of individual features of the site across nearly 1,200 square miles, Evans said in a statement on his university Web site.

"It shows conclusively that Angkor was a vast and populous network of agricultural and settlement space covering much of the Siem Reap area, and stretching far beyond the well-known temples of the central archaeological park," he said.

But the complex's size led to ecological problems that could have doomed the civilization, the researchers found. That conclusion supports a theory in the early 1950s by Bernard-Philippe Groslier, a prominent French archaeologist, that the collapse of Angkor stemmed from over-exploitation of the environment.

Impoverished Cambodia has relied heavily on the Angkor temples to earn much-needed tourism revenue. But in recent years, conservationists have expressed concerns about stress to the monuments, including the famed Angkor Wat, from the ever-increasing number of visitors.

They also fear that the unrestricted pumping of underground water to meet the rapidly rising demand of hotels, guesthouses and residents in the provincial town may be undermining Angkor's foundations, destabilizing the earth beneath the temples so much that they might sink and collapse.

Evans said the mapping of the area found delicate traces of great archaeological significance, such as ponds, occupation mounds, field patterns and signs of local shrines, still remaining on the ground surface today. But he warned that they "are under serious threat from uncontrolled development in the Siem Reap area."

He said his group has recently given the digital mapping database to Cambodia's government to use in taking appropriate and effective measures to safeguard the archaeological landscape.