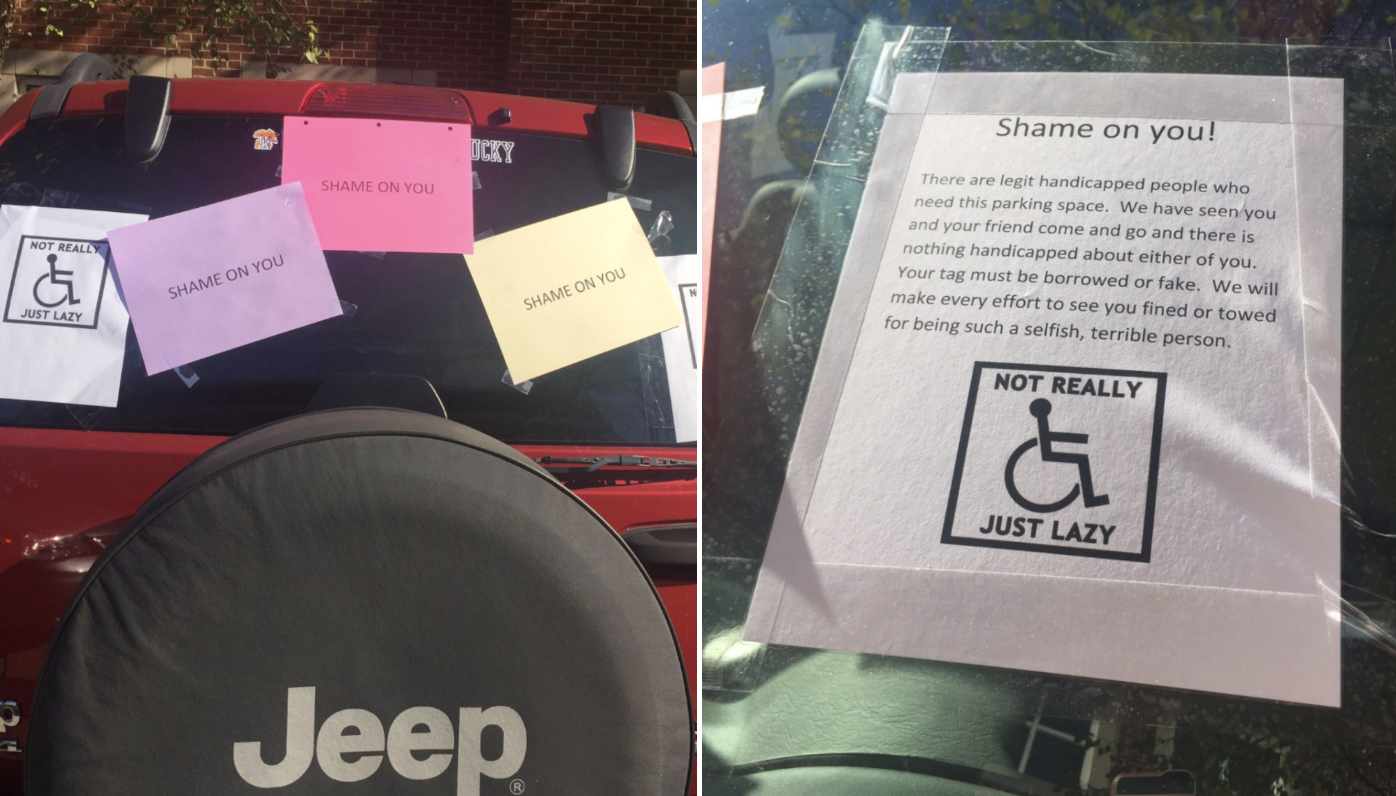 Lexi Baskin was devastated when she returned from the library to find her SUV covered in printed signs saying "shame on you" and "not handicap, just lazy."

The University of Kentucky student's car was vandalized while parked legally in a handicapped spot near the College of Pharmacy Sunday afternoon.

A paragraph-long letter from the vandal was duct-taped to her windshield, declaring to "make every effort" to have the car fined or towed.

"There are legit handicapped people who need this parking space," the letter read. "We have seen you and your friend come and go. There is nothing handicapped about either of you."

Baskin was shocked. She really does need the space -- and she has a legal right to use it.

Last summer, doctors discovered a tumor in her brain stem. It has since been removed, but she's still regularly undergoing radiation treatments that leave her dizzy and fatigued.

Baskin wanted to set the record straight, and spread a message to people everywhere about those who suffer from invisible illnesses.

"Reminder that you have no idea what's going on in people's lives," Baskin posted on Twitter, along with photos of the signs that claim she's a "selfish, terrible person." The tweet went viral with nearly 50,000 shares.

Dozens of people replied in support of Baskin — some even sharing their own experiences.

"Absolutely agree. There are lots of us with invisible disabilities," one Twitter user wrote. "Just because someone thinks we don't look ill, doesn't mean we aren't."

"I know that feeling. I have horrible arthritis and two replaced knees, but I've had someone yell insults when I don't take my cart back," another said. "Sometimes I just can't walk one more step."

It didn't take long for Baskin to realize she was not alone.

"It kind of breaks my heart there are so many people that are being like, 'Oh my gosh, I went through the same thing' or like have messaged me on Facebook and said 'I went through this' and they share their story with me," Baskin told CBS News affiliate WKYT-TV. "That's why I want this to get out there to make people aware that just because you can't see something, doesn't mean people aren't going through it."

University of Kentucky officials confirmed to WKYT-TV that they are working with campus police to investigate the incident.

"This unfortunate action was that of a rogue individual unaffiliated with Transportation Services or our police department," the university administration wrote in a statement. "UK is a community of belonging for everyone, regardless of identity or perspective, and part of that means ensuring everyone is treated with respect and dignity."