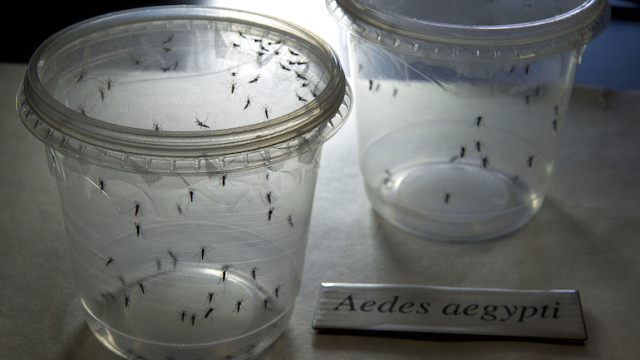 Scientists may have the first evidence that Zika can cause temporary paralysis, according to a new study of patients who developed the rare condition during an outbreak of the virus in Tahiti two years ago.

Zika is currently spreading with alarming speed across the Americas. The World Health Organization declared the epidemic to be a global emergency several weeks ago based on suspicions it may be behind a surge in disturbing birth defects and in Guillain-Barre syndrome, a neurological illness that mostly lasts a few weeks.

Before reaching South America last year, the mosquito-spread Zika had triggered outbreaks in the South Pacific on Yap island in Micronesia and in French Polynesia, including its largest island, Tahiti.

Researchers in Tahiti, France and elsewhere went back and analyzed blood samples from all 42 adults diagnosed with Guillain-Barre syndrome from the 2013-14 outbreak; nearly everyone showed signs of a previous Zika infection.

They were compared with patients who did not have the condition and did not have any Zika symptoms but were treated at the same hospital for other illnesses. Tests showed only half of that group of 98 had apparently been infected with the normally mild virus.

The research was published online Monday in the journal Lancet.

"The evidence that links Zika virus with Guillain-Barre syndrome is now substantially more compelling," said Peter Barlow, an infectious diseases expert at Edinburgh Napier University who was not part of the study. But he noted in a statement that more research was needed before reaching the same conclusion about the outbreak in the Americas, where local factors may be playing a role.

Zika is mostly spread by mosquito bites and in most people causes symptoms including fever, muscle pain and a rash. About 80 percent of people who catch the disease don't report any illness.

Guillain-Barre syndrome is typically seen after a viral or bacterial infection so a possible connection to Zika isn't entirely unexpected. It occurs when the body's immune system attacks the nervous system, often for unknown reasons. It can cause muscle weakness and breathing problems; about 5 percent of patients die from the disorder. Of the patients observed in Tahiti, none died and three months after leaving the hospital, about 40 percent could walk unaided.

The study also considered whether Guillain-Barre was the result of people being infected with both Zika and a related tropical disease, dengue, by comparing them with people who had Zika but no neurological symptoms. It found no hint that having dengue upped the risk.

Based on their findings, the scientists estimated that of 100,000 people with Zika, about 24 would develop Guillain-Barre syndrome. In Europe and North America, the average rate of the syndrome after infections like flu and dengue is about one to two people per 100,000.

For those who develop Guillain-Barre, the symptoms can be severe and alarming.

One survivor who recovered after a bout of Zika followed by Guillian-Barre in Brazil last spring told CBS News' Pamela Falk, "Everyone [in Brazil] knows the Zika symptoms, because so many people get it. With Guillain-Barre, I was paralyzed, I could not walk. All of my joints felt like lead weights."

The man, a Brazilian-American who lives in New York and did not want his name used, spent weeks recuperating in Brazil before returning to Manhattan, where he had a relapse and was hospitalized again. "It took me a long time to recover," he said.

He said in an email that because the Zika virus disappears from the body by the time patients develop neurological complications, there was only indirect evidence -- via infection-fighting antibodies -- that Zika caused Guillain-Barre syndrome. Zika is thought to be gone from the bloodstream after a week or so. Smith said not all of the Guillain-Barre cases in Tahiti could be blamed on Zika and that the researchers' estimate of the syndrome's incidence was probably inflated.

Still, experts predicted cases of Guillain-Barre syndrome would jump as Zika explodes in the Americas and WHO has warned the disease is likely to spread everywhere in the region except for Canada and Chile.

The study doesn't shed any light on whether Zika is also responsible for the spike in the number of babies born in Brazil with abnormally small heads, or microcephaly.

"That remains a mystery but our suspicions are very strong," said Jimmy Whitworth, a professor of infectious diseases at the London School of Hygiene and Tropical Medicine.

"Both Guillain-Barre syndrome and microcephaly are neurological conditions, but I don't think it would be the same mechanism that's causing both," he said. "There may be something slightly different happening with microcephaly."

Since the Zika outbreak in the Americas began last year, it has sparked epidemics in about 40 countries, of which eight have reported cases of Guillain-Barre syndrome possibly connected to Zika.