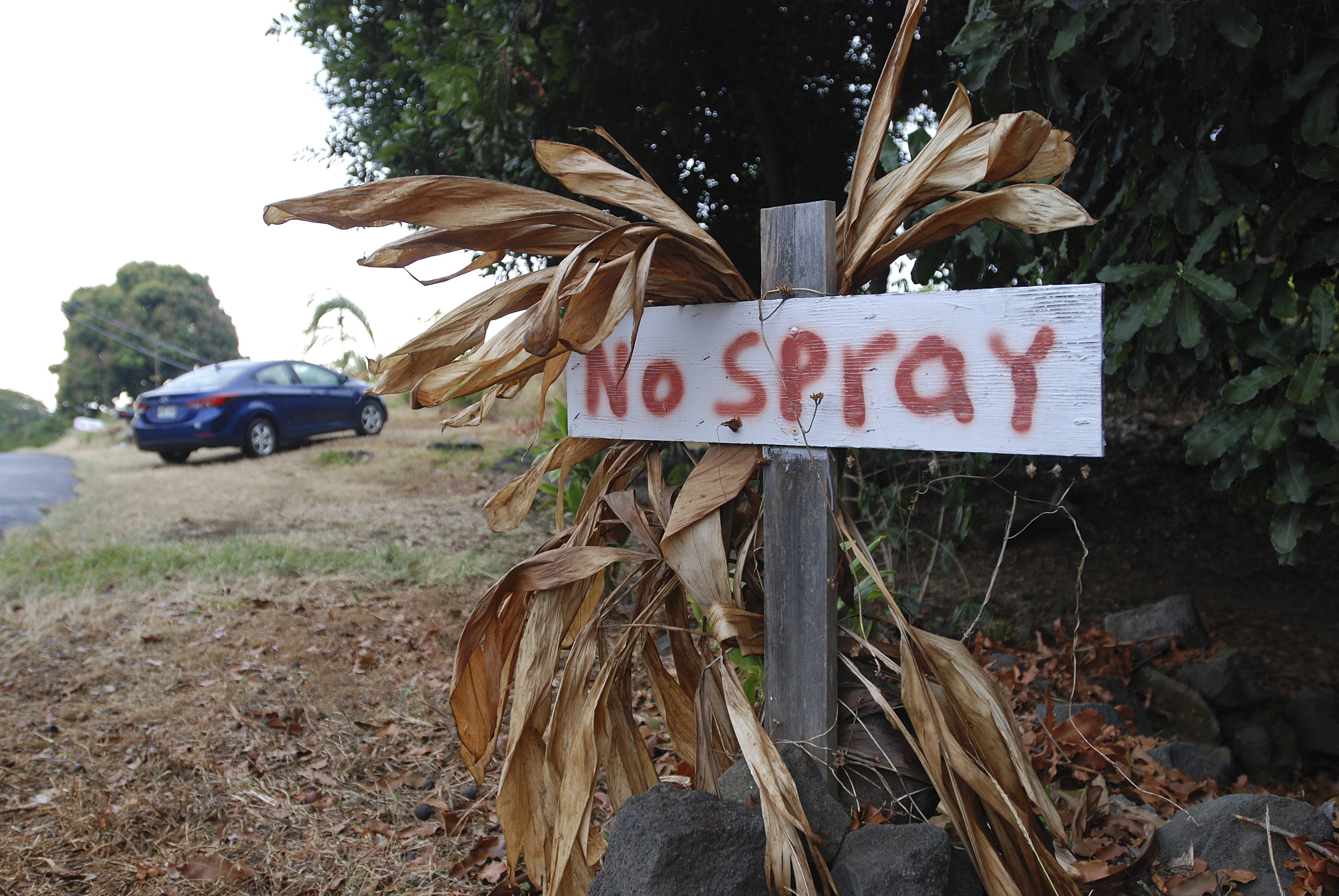 CAPTAIN COOK, Hawaii -- On a farm in the heart of Hawaii's ongoing dengue outbreak, coffee grows wild among the ferns, and vanilla vines climb guava trees. It's hard to know where nature ends and the farm begins, and that's the way organic farmers there like it.

But state efforts to combat the outbreak -- and prevent the related Zika virus from making inroads on the island -- could put these farmers out of business.

Farmers are pushing back on the pesticide the state used to kill the mosquitoes that transmit both infections, and some property owners have posted "no spray" signs discouraging the use of pesticides beyond what the state is using to fight the outbreak.

Global health officials have identified mosquito eradication as the key to curtailing the Zika outbreak that has taken hold in Latin America and been linked to birth defects in Brazil, as well as preventing it from taking hold in other areas where the Aedes aegypti mosquito is prevalent, including the southern U.S.

"Any place a dengue outbreak can occur, a Zika outbreak could occur," Lyle Peterson, director of CDC's division of vector-borne diseases, said in an interview with The Associated Press. "Given the fact that many affected travelers could be coming to Hawaii as outbreaks occur around the Pacific, there is always the possibility of infecting local mosquitoes."

But mosquito control is highly variable around the U.S., and a chunk of the $1.8 billion in emergency funding the Obama administration is seeking for Zika would go to shoring up those capabilities, Dr. Anne Schuchat, CDC's principle deputy director, told a Senate committee Wednesday.

"In many areas, there are big holes," she said.

Plus, this mosquito species is particularly hard to deal with, an aggressive daytime biter that can live not just in the yard but inside the house. A little water left in a flower pot is enough for its eggs to hatch; they even can survive drought until rain returns.

Hawaii has had four cases of Zika, all in travelers to countries with ongoing transmission, according to the Centers for Disease Control and Prevention. But local mosquitoes have infected 260 on the Big Island with dengue fever. And the CDC reported active local Zika transmissions in Pacific islands that have a fair amount of traffic to Hawaii, including Samoa, American Samoa, the Marshall Islands and Tonga.

In a report, Peterson said staff shortages in the state Health Department and conditions on the island make it difficult to fight mosquito-borne diseases. The report cited abundant mosquito breeding grounds, dense vegetation, unoccupied homes and widespread use of cisterns to provide water to households.

On Old Ways Farm, organic farmer Steve Mann tends to his herbs with mosquito netting dangling from his straw hat. Neighbors have been infected with dengue, but Mann was concerned about the type of pesticide, Aqua-Reslin, that the state used to combat the outbreak.

"It's not organic, and that would cancel our certification for a period of three years," Mann said. "That might well put us out of business."

Organic farmers aren't the only ones pushing back. Hundreds of residents flock to the Legislature annually decrying their use.

Steve Okoji, supervising sanitarian for the state Department of Health, said his teams ask permission before spraying at homes and work with farmers on possible alternatives. But they have reached only a quarter of households in dengue-affected areas, instead of the recommended 90 percent, the CDC report said. Okoji says repeated visits have helped improve that number.

Hawaii slashed its mosquito control and entomology staff from 56 employees in 2009 to 25 in 2016. The state has redirected workers who usually perform sanitation and radiological health roles to help fight dengue.

"We actually have an adequate amount of people and resources to meet this response ... but what we're doing is we're just pretty much treading water," Okoji said. "We need to actually try and get ahead of the disease."

After new cases of dengue cropped up in touristy Kailua-Kona, volunteers fanned out to educate the community and a team searched for mosquito breeding grounds at the Courtyard Marriott King Kamehameha's Kona Beach Hotel, dumping out buckets of water that had been set out for feral cats.

"It's not a question of if, it's a question of when Zika comes here to this island, and we have a very unique opportunity right now to squash it," said Karen Anderson, a Big Island resident who started a Facebook page to share information about the outbreak.

Anderson and other residents distributed thousands of mosquito traps in their neighborhoods.

"We work three jobs, and now we've added this, because nobody else is doing it," said Krista Johnson, 49, a commercial fisherman, estate caretaker and researcher on the Big Island.

In a previous dengue fever outbreak in 2001 that sickened 122 people, the state hired more than 200 workers to fight mosquitoes and other pests.

This time, 10 new staffers will be hired with money the governor released in an emergency proclamation that also allows the state to spray without a land owner's permission, said Virginia Pressler, director of the state Health Department.

Meanwhile, the state is advising residents to remove standing water, fix leaky faucets and repair screens to keep mosquitoes out. The public has been responsive, but their sense of urgency wears off over time, said Rep. Nicole Lowen, who represents part of the Big Island.

"If we're not proactive about preventing these things coming to Hawaii, we're going to lose tourists, and it will be devastating not only for public health, but also for Hawaii's economy," Lowen said.

Dengue victim BreeLyn DuPertuis, a South Kona massage therapist and organic farmer, allowed crews to spray her property with pesticide to reduce the threat for others.

"I think if there was more resources put toward it, it would have been handled in a more effective way," DuPertuis said. "Of all the times to act, and act aggressively, it's now."

Editor's note: This story has been corrected after The Associated Press reported erroneously that farmer Steve Mann wouldn't allow his home or farm to be sprayed with pesticides. Mann was concerned about the type of pesticide Hawaii vector control teams used to fight the dengue fever outbreak, but vector control workers never attempted to spray his property. Also, a reference to "no spray" signs in the story suggested that farmers were posting the signs in response to pesticides used to fight the outbreak. The signs are posted on more properties than just farms and can indicate unwillingness to allow spraying of other pesticides.