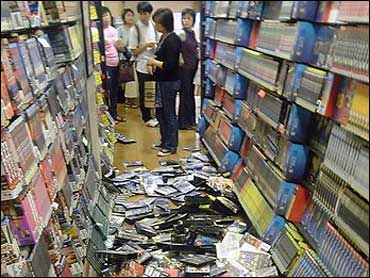 There was no danger of tsunami, Japan's Meteorological Agency said. The quake was the strongest, as measured on Japan's sliding scale of tremor intensity, to hit the capital since 1992, Kyodo News reported.

The earthquake, which struck at 4:35 p.m., was centered about 55 miles underground in Chiba prefecture, just east of Tokyo, the Meteorological Agency said.

The quake injured at least 27 people in the area, including five people who were hit by a falling signboard at a supermarket in neighboring Saitama prefecture, Kyodo reported. There were some 50 cases of people being briefly trapped in elevators.

The Meteorological Agency gave the quake an initial reading of magnitude 5.7 but later upgraded its strength.

Power supply in eastern Japan was not disrupted, but Tokyo's main international airport in Narita briefly closed its runways. Bullet trains between Tokyo and western coastal areas were also suspended, but air and train services resumed later in the evening.

Tokyo has not suffered a major earthquake since one in 1923 killed 140,000 people, but many experts say the capital is overdue for another strong tremor. A government report last year said a powerful earthquake under Tokyo could kill as many as 12,000 people and destroy 850,000 homes.

Japan sits at the juncture of four tectonic plates, or moving slabs of the earth's outer crust, and is one of the world's most quake-prone regions.

A magnitude-5 quake can damage homes and other buildings if it is centered in a heavily populated area. A magnitude-6.8 temblor struck the northern Japanese prefecture of Niigata last October, killing 40 people and injured more than 2,700.