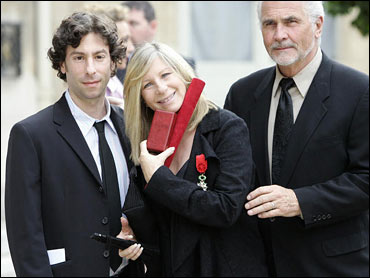 Barbra Streisand performed her first-ever concert in France this week - and was rewarded with a medal of the Legion of Honor.

French President Nicolas Sarkozy awarded the medal to Streisand in a ceremony Thursday, the first time he has bestowed the honor since taking over from Jacques Chirac last month.

"You are the America that we love," said Sarkozy, who is seen as more U.S.-friendly than Chirac. "Women like you ... do a lot to bring our two peoples together."

Streisand told Sarkozy, a conservative, that he reminded her of former U.S. Presidents Kennedy and Clinton, "who appreciated art and recognized the importance of the arts in the world."

"I am deeply honored to be joining the playwrights, heads of state, artists and leaders who have accepted this honor before me," Streisand, 65, said in a statement. "I leave with a sense of inspiration and responsibility as an artist to always reflect the truth and as a citizen to try and create a world of justice, compassion, equality and peace - one with a little more music and a little more joy."

Created by Napoleon Bonaparte in the early 19th century, the Legion of Honor is France's elite national merit society. Although foreigners cannot be officially inducted into the Legion, they are routinely made honorary recipients.