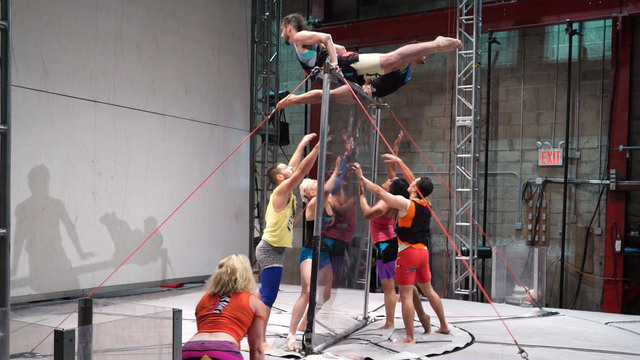 Dancers in the STREB Extreme Action Company like to look fear in the face. They are not the stuff of ballet and they redefine modern dance.

Elizabeth Streb grew up in Rochester, New York, and watched her bricklayer father work his body until it was all used up. That image has influenced how she regards her dancers, their bodies and their limits, report CBS News correspondent Elaine Quijano.

It is unlike any performance you will ever see -- part dance, part gymnastics, part acrobatics.

"My project is really about inventing extreme action," Streb said.

When she choreographs a show, dancers become daredevils -- skilled in the art of falling and crashing.

"Drama in action is really only [achieved] once you amp it up to an extreme level," Streb said.

Streb's productions have plenty of amping, and plenty of extreme.

Jackie Carlson is one of the troupe's 10 dancers, or "action heroes" as Streb calls them.

"You need to have a healthy amount of fear, and just look that fear in the face and go for it," Carlson said

She's been flying, flipping, and falling under Streb's direction for eight years.

"This kind of fear, I crave it and I need it to live, basically," Carlson said.

In terms of what she looks for in a dancer physically, Streb said "the bigger, the better."

"I love big people and I think for the dance world, even when we tour around the colleges, they're still being told to lose weight and be skinny and it's a tragedy," she said. "I think it's more exciting to see a larger person. They have more power. It's more interesting."

Streb used to put her own body in the crosshairs for the sake of her art. Now 65 years old, she can no longer take the physical punishment.

"Well, to a normal pedestrian, you would probably call it pain and it would hurt," Streb said. "We don't use the word pain; we say it's another rather interesting foreign sensation."

There has only been one serious injury to a STREB dancer -- Deeann Nelson broke her back in 2007.

Critics have claimed that what Streb does can't really be considered dance.

"I've felt that at times. I think that dance is the art of movement. And I think that they have really fallen short asking more rigorous questions about time and space, and what the body is capable of," Streb said.

Streb does not choreograph to music, which she has said is the enemy of dance. She believes movement should be separate from music and its rhythm.

She's looking to show off the human body's capabilities in a new and exciting way.

"It's figuring out how to set up a condition whereby you discover moves no one's ever imagined a human body can do," Streb said. "I'm looking for something that I kind of suspect is there but I've never seen it before."

She said she hasn't come close to reaching that goal yet, but she keeps trying.

The STREB troupe performs up to 60 shows a year -- traveling around the country and the world.

Their most spectacular show to date was in London in 2012. There, Streb and two other dancers literally walked down the glass-domed wall of London's city hall.

And her action heroes performed while suspended from one of the world's largest Ferris wheels -- the London Eye.

"I would agree with them. You know, I think it was really too much to ask people to do, and it was horrifying, really. So that's what I want, though. To me, that's my highest achievement," Streb said.

At the end of the day, not everybody has the same relationship to pain and danger as she and her dancers do.

"Don't you think that by the end of your life, you should be all used up? My whole thing is thinking it's mildly immoral not to, by the last breath you take, have pretty much wrecked your body. You've used it," Streb said. "The pain is just a, you know, a modus operandi to get there."