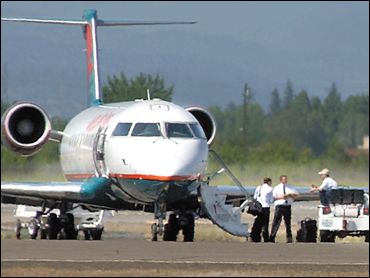 A man running late for his flight to Phoenix called in a phony bomb threat Monday in hopes that the plane would be delayed long enough for him to get on board, police said.

America West clerks at the Rogue Valley International-Medford Airport became suspicious and notified police after the man came to their desk asking about Flight 6262, which by then was on its way back to the airport because of the threat, said Medford Police Lt. Mike Moran.

The man was held on outstanding, unrelated criminal charges and being questioned by the FBI, Moran said. The suspect was not immediately identified.

The plane, an America West express shuttle operated by Mesa Airlines, returned to the airport around 3 p.m., after the threat was called into America West headquarters.

The plane had been in the air for just a few moments when a flight attendant took a call from the pilot, said passenger Barbara Tatom of El Paso, Texas.

"She just turned white," Tatom said of the flight attendant. "I thought 'Oh my God, I think we're in trouble.' "

The 30 passengers were evacuated and a bomb squad searched the plane with the help of a dog. All bags were rechecked for any trace of an explosive device.

Officials believed the call was a "credible threat" because the caller referred to a specific flight, airport spokeswoman Kim Stearns said.

"The individual was firm and gave information for a specific flight," she said.