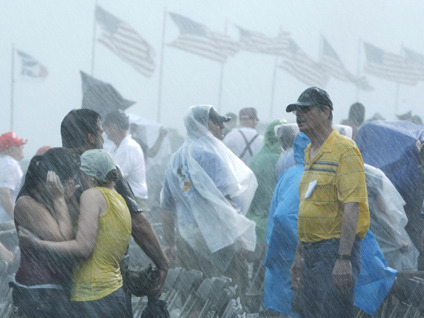 Even the president is not immune from weather, especially a flash thunderstorm in the Midwest in the summer.

President Obama's Memorial Day ceremony at the National Cemetery in Elwood, Ill., was stopped temporarily, and then canceled outright, while a severe thunderstorm passed through Northern Illinois.

As lighting cracked and thunder clapped, the President went to the podium to tell the thousands in the crowd to seek shelter.

Holding an umbrella in a massive rain storm, the President told the crowd, "Excuse me, everybody listen up. We are a little bit concerned about lightening. This may not be safe. So I know that all of you are here to commemorate the fallen and that's why we're here. What we'd like to do is, if possible, have people move back to their cars, and if this passes in the next 15-20 minutes, I will stick around and we'll come up and start up the ceremony again. But we don't want to endanger anyone, particularly children in the audience. So I'd ask everybody to very calmly, move back to your cars. I'm going to move back to mine. We will wait to make sure that the thunder has passed. A little bit of rain doesn't hurt anybody, but we don't want anybody being struck by lightning.

"God bless you everybody. We will be staying here and will make an announcement shortly," he said.

He stayed true to his word and stuck around the area for about an hour. He even popped onto a bus full of soaked military families who were waiting out the storm. He thanked the crowd on the bus and wished everyone a "Happy Memorial Day."

The press pool was told that the President made the decision himself to give the warning to the crowd. In the aftermath of the storm, there were pools of water all over the cemetery and the ceremonial wreath the President placed among the grave sites had blown over from the storm.

After it was clear that the event would not resume, he began the 50-mile drive back to Chicago.

On the way back he made an unannounced visit to a veterans hospital.

Robert Hendin is a CBS News White House producer. You can read more of his posts in Hotsheet here.
View CBS News In