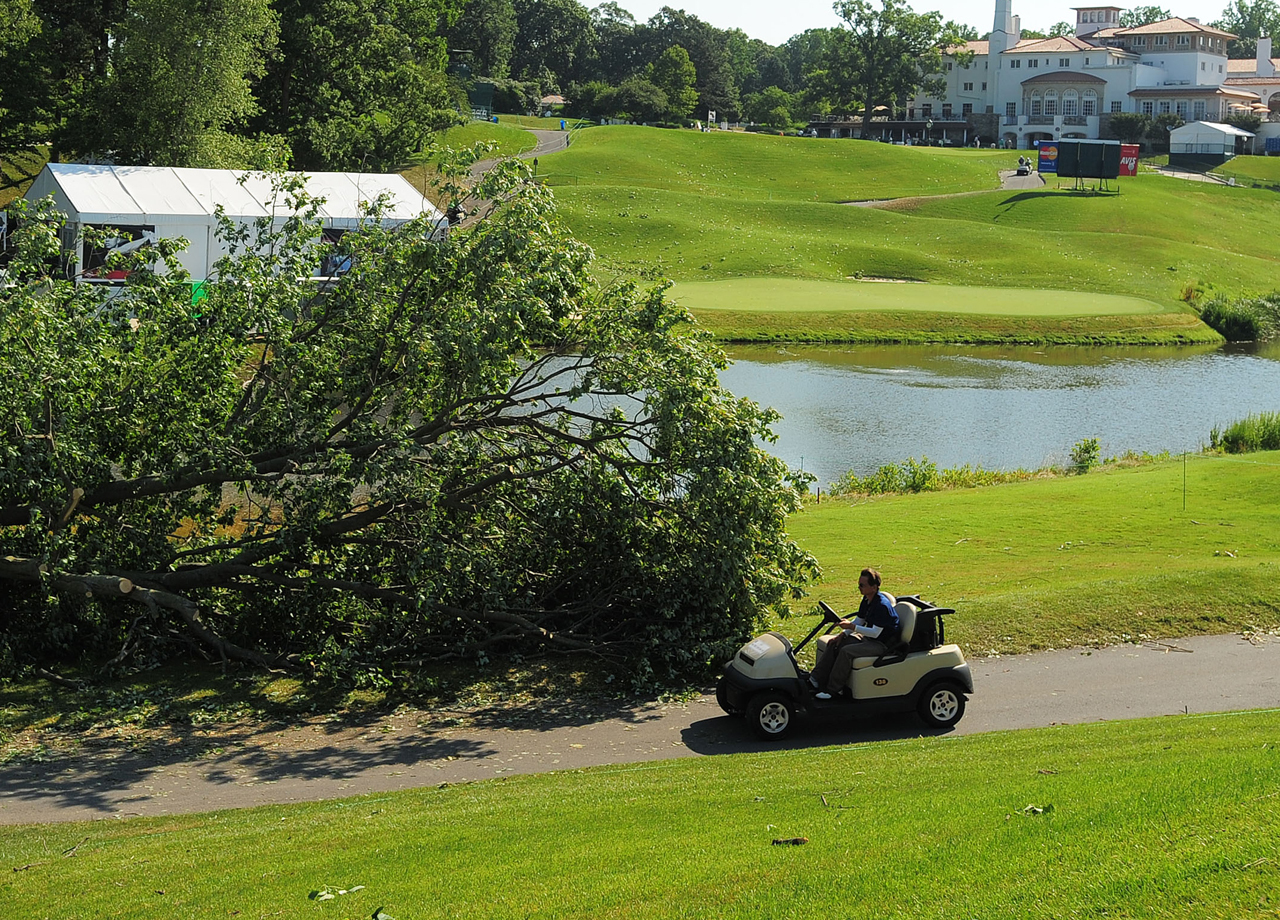 (AP) BETHESDA, Md. — Even with Tiger Woods in the hunt, Saturday figures to be awfully quiet at Congressional for the third round of the AT&T National.

Because of a powerful storm that uprooted dozens of trees, including a 75-foot tree that crashed across the 14th fairway, the tournament was closed to spectators and volunteers because of safety concerns.

The third round was delayed six hours. It was to start at 1 p.m., with threesomes going off both tees.

The storms knocked out power to more than 400,000 customers in the area, and downed trees along the Beltway. Congressional was not spared.

Workers arriving before dawn found some 40 trees uprooted, and limbs large and small scattered along the golf course. The 11th fairway was littered with branches for some 300 yards.

That would be time-consuming to clear. The more jarring images were large trees that had been cracked at the trunk, some of them crashing on top of the ropes that had lined the fairways. The 75-foot tree on the 14th was about 75 yards in front of the driving zone. One worker arrived with three small chain saws in the back of his cart.

Given the size of the tree, it was akin to bringing a garden hose to put out a bonfire.

The wood signs on nearly every tee box had been ripped from the sign posts, and the trailers that house the PGA Tour's communications system, such as Shotlink scoring, narrowly escaped severe damage. Workers said the cables that provide the wireless signal were down, which could cause delays in scoring reports.

Hunter Mahan was at 7-under 135 and had a two-shot lead. Woods, who had a 68 on Friday, was five shots behind.

Several players were having breakfast in the dim clubhouse at Congressional, which was getting its power from a generator.

Tournament officials said wind from 70 to 80 mph was reported. Several tents were blown away, including those that had been set up where shuttles dropped off fans, and on the first and 10th tees.

Saturday tickets would be honored on Sunday.

But for the play on Saturday, no one was to be allowed on the course except for security, tournament officials and workers and media. Players' families were allowed.

Eighty players made the cut, though the tour hoped to be able to complete the third round.