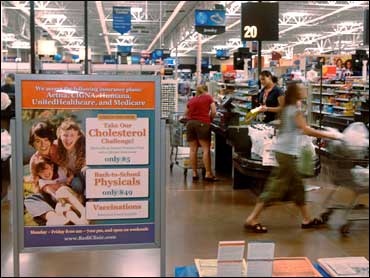 Increasingly, American consumers are shopping for health care the way they buy a hamburger or milk shake at a fast-food chain: By standing in line at a local store under a menu.

About 7 percent of Americans have tried a clinic at least once, according to an estimate by the Convenient Care Association, an industry trade group formed last year. That number is expected to increase dramatically, as major pharmacy operators like Wal-Mart Stores Inc., CVS Corp., Target Corp. and Walgreen Co., partner with miniclinic providers like RediClinic and MinuteClinic to expand operations. The trade group estimated there will be more than 700 by year-end, up from the more than 400 now, and 2,000 by the end of 2008.

With the nation's $2 trillion health care system in need of repair, such an express approach to health care — which offers a wait time averaging about 15 minutes and evening and weekend hours — is being heralded as serving up a cheaper and quicker alternative than a doctor's office or an emergency room. A physical exam costs on average $60, while a flu shot typically costs about $20. A strep throat test has a price tag of about $15.

"I was frankly very impressed with how thorough (the examination) was," said Susan Anthony, who visited a clinic at a Phoenix, Md., Target for a dry cough. "And it was fast. I walked in at 10:30 a.m. and was in my car a little after 11:00 a.m."

The American Medical Association said a growing number of medical practices are extending their office hours or forming their own clinics to compete. But concerns about quality of care are rising among physicians and some industry experts say the clinics' services need to be more comprehensive if they are going to have a big impact on reducing overall health care costs.

The competition is already spawning expanded services as well as new spinoffs. Consumer Health Services Inc. — founded by a former investor of MinuteClinic, considered the pioneer in the industry — just started rolling out walk-in doctor's offices at Duane Reade Inc. drugstores in the New York City area. The clinics offer broader services that include wart removal and treatment for sprained ankles.

The ventures are promising enough that big-shot investors are jumping into the game. RediClinic got an undisclosed cash infusion from Revolution LLC, the investment house launched by AOL founder Steve Case.

Support among health insurance companies is also growing; about 40 percent to 50 percent of clinics accept insurance from providers like Humana Inc., UnitedHealth Group Inc. and Aetna Inc., according to CCA.

But concerns are rising in the medical industry that these operations remain largely unregulated and are prone to conflicts of interest. Some physicians are also concerned that the clinics could disrupt the continuity of care and result in serious underlying health conditions going undetected.

Dr. Peter Carmel, a trustee on the AMA board, said "the path of abuse is wide open," and the clinics need to be better regulated.

A growing number of states have passed legislation to better define the role of the nurse practitioner at these clinics, but store-based clinic executives say some of the state rules are too burdensome and hinder growth. According to the American College of Nurse Practitioners, approximately 23 states allow nurse practitioners to treat patients on their own. The remainder requires some formal relationship with a physician, which varies from supervision to collaboration. In Texas, for example, the physician is required to be at the site for 20 percent of the time a clinic is open.

Store-based health clinics are held to the same high standards as doctors' offices, said Tine Hansen-Turten, executive director of the Convenient Care Association. She pointed out that store clinics are either monitored by a state board of nursing or board of medicine, and sometimes by both.

AMA also wants to ban the practice of health insurance companies waiving or lowering co-payments for clinic patients, which it calls a conflict of interest.

Dr. David Plocher, the senior medical officer at Blue Cross Blue Shield of Minnesota, said that "the normal market forces should determine such things." His company has reduced or waived co-payments for 25 member companies who use MinuteClinics and several other store-based clinics.

The savings can be significant.

A visit to a store-based clinic averages about $60, but a doctor's visit costs twice as much, particularly in urban markets, according to Barry Barnett, a health care consultant for PricewaterhouseCoopers. That compares to about $300 for an emergency room visit, according to Barnett.

Like many of his industry peers, Michael Howe, president and CEO of MinuteClinic, said the concerns about quality are overblown.

"I wouldn't call it express care. I would call it efficient care," added Howe.

The AMA denies that its criticism of these clinics is being driven by economic interests, though there's no doubt that primary physicians could lose some business as their insured patients go elsewhere for minor ailments.

But health care consultants say that while the clinics may help save customers money and time, their ability to reduce overall health care costs will probably be limited given that they are really tackling the most minor of health problems.

A bigger effect lies in increased worker availability as employees don't have to take as much time out of their work schedules to go to a doctor's office, according to Dr. Tim Newman, senior medical consultant for Watson Wyatt Worldwide.

The growing number of onsite clinics at workplaces, staffed by physicians, actually have more of a potential to reduce overall health care costs since they focus on disease management, not episodic illnesses. The onsite clinics are not part of the Convenient Care Association's total count, since they are not store-based clinics and have a different model.

Store clinics are proving to be good business; they take about 12 to 18 months to break even. For retailers, the highest-margin products continue to be pharmaceutical, and clinics average about one drug prescription per patient, according to clinic providers. Also, stores can enjoy additional sales when sick customers pick up other items.

But it's still big challenge to gain trust among consumers wary about being treated at a local drug store. Dr. Susan Bowers-Johnson, the medical director for the current four clinic locations at Duane Reade, said that a father recently brought in his 4-year-old child who had a sore on his hand. He said if she was going to prescribe antibiotics, he would rather get them through his family physician.

"Many people are skeptical," she acknowledged.