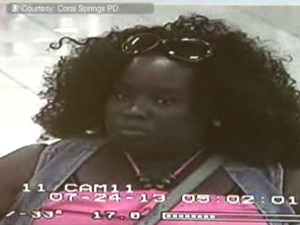 (CBS) CORAL SPRINGS - Police in South Florida are trying to identify an identity thief - a woman they say has run up a $3,000 tab in someone else's name, and who they've seen on surveillance video, CBS Miami reported.

The woman, caught on tape at a Kohl's Department store, purchased $370 worth of merchandise using a fraudulent credit card on July 23, according to Coral Springs police. They said the same woman is also wanted for buying merchandise with a fake credit card at Target, Wal-Mart and Macy's.

"What she'll do initially, she'll obtain your information, whether it's online or whether it's something you filled out like a job application and then she goes online and she opens a line of credit with your information, McHugh said. She'll provide her cell phone number, fraudulent address where to mail it to or something of that nature so if they do contact her, 'Hey Miss so-and-so, did you open up, apply for a line of credit?' 'Yea that's me I applied for it.'" McHugh continued, "All we know is that she does work very closely with another male, we think the male actually sits outside the store waiting in a vehicle so when she leaves, they leave the area very quickly."

"The City of Sunrise currently has cases with the same individual who opened up lines of credit under someone else's information and not the same victim that we have, they have a different victim," said Lt. McHugh.

If you recognize the woman, call Broward Crime Stoppers at (954) 493-TIPS.