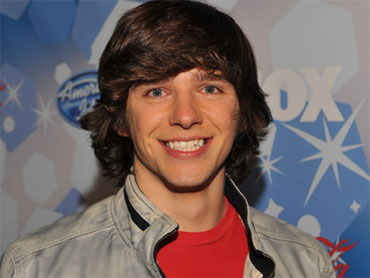 Tim Urban couldn't get any satisfaction on "American Idol."

The judges dismissed Urban's reggae rendition of "Under My Thumb" during a night of Rolling Stones tunes in the Fox singing competition's first round of finals Tuesday. "Idol" judge Randy Jackson dubbed the 20-year-old college student's take on the 1966 classic "weird," and Simon Cowell affirmed it was a "crazy decision." Urban shrugged off their criticism.

"I tried to make it my own," he attested over howls from the audience.

The panel was most impressed with Siobhan Magnus' theatrical interpretation of "Paint It Black," which concluded with the 20-year-old glass blower wailing into the microphone.

Jackson called Magnus' approach "hot," while Cowell proclaimed it was the "standout performance of the night." Kara DioGuardi said it reminded her of Adam Lambert, last season's runner-up.

"I beat you up good last week, but you showed me tonight," DioGuardi told Kelly.

Paige Miles overcame laryngitis to croon "Honky Tonk Woman," which earned the judges' praise. Jackson and Cowell were shocked to learn the 24-year-old preschool teacher was ill, while DeGeneres and DioGuardi lauded the struggling Miles for commanding the stage. Miles told host Ryan Seacrest it was the first time she sang the song "full out."

"I haven't really rehearsed," she said.

Casey James and Lee Dewyze accompanied themselves with their respective guitars on bluesy editions of "It's All Over Now" and "Beast Of Burden." DioGuardi called James, 27, a "rock star." But Dewyze wasn't as lucky. Cowell said the shy 23-year-old paint-sales clerk needs to "come on this stage and have a moment."

The evening wasn't without some drama. Cowell, who is leaving "Idol" at the end of ninth season to executive produce and judge an American version of his British talent contest "The X Factor," snapped at Seacrest after 26-year-old personal trainer Michael Lynche opened the show with "Miss You." Seacrest stepped off the stage and stared down the acerbic judge.

That prompted Cowell to acknowledge: "This is getting very uncomfortable."