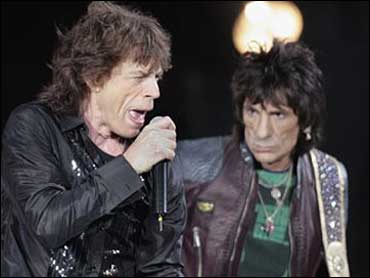 The kickoff of the Rolling Stones' European tour opened to rave reviews, a big crowd and a massive traffic jam.

Some 33,000 fans showed up for the show in the town of Werchter, but when Mick Jagger started off with "Start Me Up," some fans were still shuffling for position on the grounds after being stuck for hours in a 30-mile traffic jam caused by the concert and made worse by a nearby accident.

The "A Bigger Bang" tour will feature 30 shows across Europe, including performances in Belgrade, Serbia and in St. Petersburg, Russia, which the band has never visited.

In addition to making stops in Eastern Europe, the band will play in Britain, Ireland, the Netherlands, Germany, France, Spain, Switzerland and Scandinavia.

The Stones' previous tour became the highest-grossing one in concert history in November 2006, netting the band over $100 million last year and putting them at the top of Forbes's annual list of music's biggest earners.