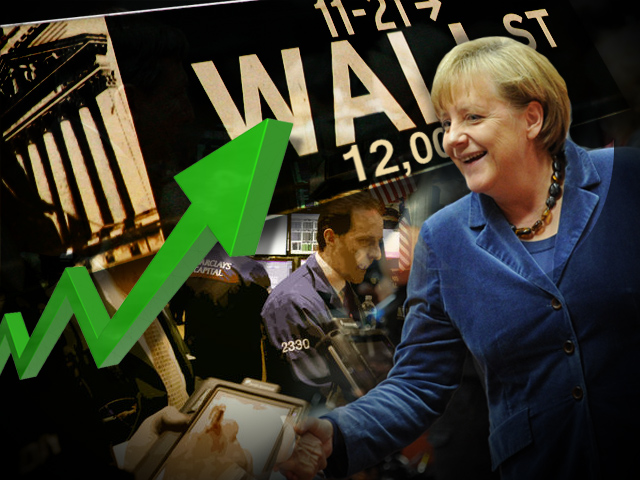 The Dow Jones industrial average jumped 300 points at midday. All 30 stocks in the Dow rose, led by aluminum maker Alcoa Inc. with a 7 percent gain. Commodities prices and Treasury yields also rose as investors took on more risk. The euro rose sharply against the dollar.

Europe's sweeping agreement, reached after an all-night summit meeting, is aimed at preventing the Greek government's inability to pay its debt from escalating into another financial crisis like the one in September 2008 after the collapse of Lehman Brothers.

Banks agreed to take 50 percent losses on the Greek bonds they hold. Europe will also strengthen a financial rescue fund to protect the region's banks and other struggling European countries such as Italy and Portugal.

"This seems to set aside the worries that there would be a massive contagion over there that would have brought everything down with it," said Mark Lamkin, head of Lamkin Wealth Management.

Raw materials producers, banks and stocks in other industries that depend on a strong economy for profit growth led the way. Copper jumped 5 percent to $3.66 a pound and crude oil jumped 3 percent to $93 a barrel.

The euro rose sharply, to $1.42, as confidence in Europe's financial system grew. The euro was worth $1.39 late Wednesday and had been as low as $1.32 on Oct. 3. European stock indexes also soared. France's CAC-40 rose 6.3 percent and Germany's DAX jumped 6.1 percent.

Investors sold U.S. Treasury notes and bonds, an indication they feel less need for safer investments. The yield on the 10-year Treasury note, which moves in the opposite direction of its price, rose to 2.30 percent from 2.21 percent late Wednesday.

European leaders still have to finalize the details of their latest plan. French President Nicolas Sarkozy spoke with Chinese President Hu Jintao amid hopes that countries with lots of cash like China can contribute to the European rescue.

Past attempts to contain Europe's two-year debt crisis have proved insufficient. Greece has been surviving on rescue loans since May 2010. In July, creditors agreed to take some losses on their Greek bonds, but that wasn't enough to fix the problem.

Worries about Europe's debt crisis and a weak U.S. economy dragged the S&P 500 down 19.4 percent between April 29 and Oct. 3. That put it on the cusp of what's called a bear market, which is a 20 percent decline.

Since then, there have been a number of more encouraging signs on the U.S. economy. The government reported Thursday that the economy grew at a 2.5 percent annual rate from July through September on stronger consumer spending and business investment. That was nearly double the 1.3 percent growth in the previous quarter.

Despite the jitters over Europe, many large U.S. companies have been reporting strong profit growth in the third quarter.

Avon Products Inc. fell 18 percent, the most in the S&P 500, after the company said the Securities and Exchange Commission is investigating its contacts with financial analysts and Avon's own probe into bribery in China and other countries.