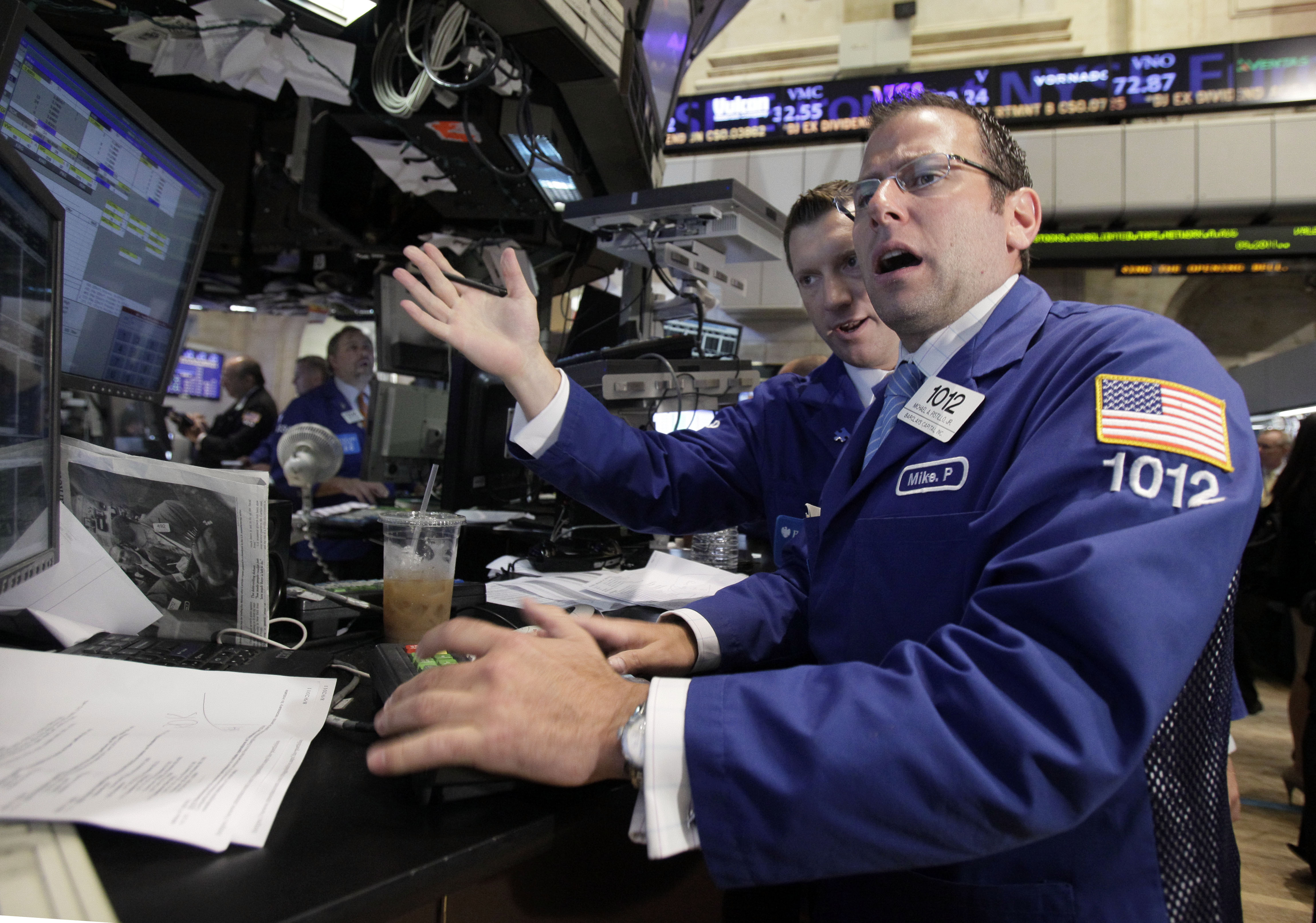 NEW YORK - The Federal Reserve spoke — and financial markets swung wildly before making a huge rally in the final hour.

The Dow Jones industrial average finished up more than 400 points after the Fed's statement was released on Tuesday. But stocks first sank after the Fed said that economic growth this year has been "considerably slower" than it expected and that it will keep interest rates near their record low of almost zero until at least the middle of 2013. But then they shot back up.

The 10-year Treasury note rose sharply within minutes, sending its yield down to 2.10 percent, a low for the year. It had reached a low of 2.34 percent on Monday. A bond's yield drops when its price rises. Gold, considered a safe haven when other investments are tumultuous, rose again to $1,773.60 per ounce, up from its $1,713.20 closing price on Monday.

The Fed said that it expects "a somewhat slower pace of recovery over coming quarters." It also said that temporary factors, such as the high price of gasoline this spring and Japan's March earthquake and tsunami, were only part of the reason for the weaker economy.

The Fed statement didn't give investors any new information, said Peter Coleman, head of equity research at investment bank JMP Securities. He said investors might have liked to hear something more positive "but the data, with the exception of one okay jobs report, has been pretty consistently negative the last few weeks."

"The market is already pricing in" low rates for the long term, said Alan Ruskin, an analyst with Deutsche Bank. He said reassurance that rates would stay low until mid-2013 was unlikely to provide much of a boost in the near term.

On Monday the Dow plunged 634.76 points on the first day of trading since Standard & Poor's cut the U.S. credit rating from AAA to AA+.

Boosting the stock market isn't one of the Fed's jobs, but that hasn't stopped investors from parsing every word of the statements made by the Fed and its chairman, Ben Bernanke.

The Fed's mandate is to keep prices stable and promote low unemployment, not boost stocks. But a stock dive after Fed comments has happened before. On June 3, the stock market suffered a late-day dive when Bernanke spoke in public at a conference. Investors said they were looking for a hint of new plans to spur economic growth. When that didn't come, all three major indexes sank.

After Bernanke outlined the plan for a second round of quantitative easing in August 2010, the S&P 500 index gained 28 percent over eight months. Investors pointed to that rebound as evidence that quantitative easing worked — and so did Bernanke. This sentiment led some people to believe that if stocks fall too far, the Fed would come to the rescue.

The manufacturing and services industries barely grew in July. The unemployment rate remains above 9 percent, despite 154,000 jobs added in the private sector in July.

Economies across the globe are also struggling.

Worries are growing that Spain or Italy could become the next European country to be unable to repay its debt. Another concern: high inflation in less-developed countries, which have been the world's main economic engine through the recovery. China's inflation rose to a 37-month high in July.

Concerns about the global economy have pulled attention away from stronger corporate earnings this spring.

Among the 441 companies in the S&P 500 index that have already reported their second-quarter earnings, profits are up 12 percent from a year ago.