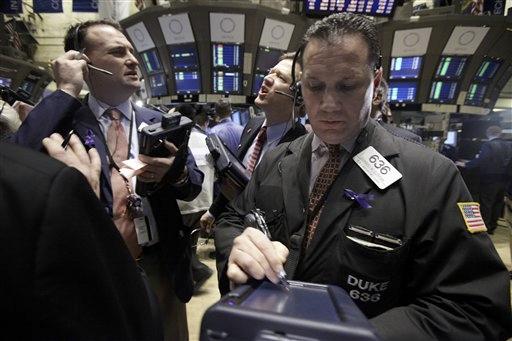 Family Dollar Stores Inc. rose 21 percent to $53.25 after investor Nelson Peltz's firm offered to pay up to $60 a share to take the discount retailer private. That was a 36 percent premium from Tuesday's closing price. Family Dollar rose the most of any stock in the Standard & Poor's 500 index.

Genzyme Corp. rose 1.1 percent after French drug maker Sanofi-Aventis agreed to buy the U.S. biotechnology firm for $20 billion in cash. The deal ended months of haggling between the two companies.

Dell Inc. rose 12 percent a day after the personal computer maker raised its full-year revenue forecast, a sign that businesses are spending more on technology.

Deere & Co. rose 2.4 percent after the equipment maker said its net income more than doubled, thanks to growing sales of large farm machinery in the U.S. and Canada.

The Commerce Department reported that new home construction rose in January by the largest amount in 20 months. The pace of construction is still way off from levels seen in a healthy economy, but analysts were optimistic about the report.

The Labor Department also reported that wholesale prices rose sharply in January due to higher costs for gas and other goods. The Federal Reserve reported separately that factories produced more goods for the fifth straight month in January, although overall industrial production fell.

Three stocks rose for every one that fell on the New York Stock Exchange. Volume was 930 million shares.