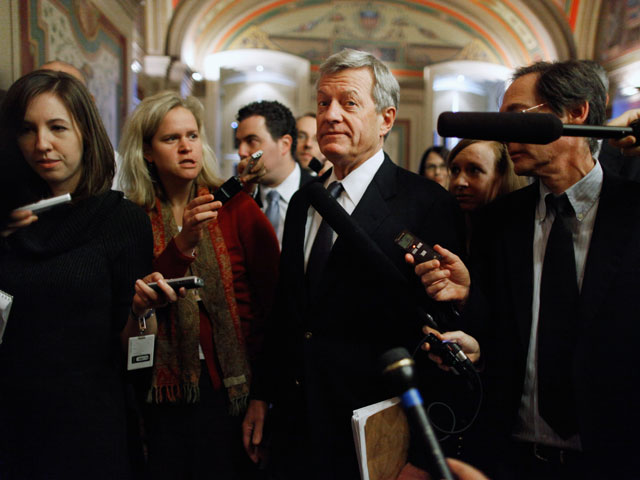 NEW YORK - The stock market was not exactly surprised that the so-called supercommittee failed to reach a deal to cut the federal deficit. But since summer, investors have bought at the first sign of hope and sold at the first hint of trouble.

So on Monday, they sold big.

The Dow Jones industrial average closed the day down 249 points after the supercommittee, a special committee of Congress assigned to come up with $1.2 trillion in deficit cuts over 10 years, indicated that there would be no deal. The Dow fell 2.1 percent to 11,547 Monday. The S&P closed down 23 points, or 2 percent, at 1,193. The Nasdaq lost 49, or 1.9 percent, to 2,523. Five stocks fell for every one that rose on the New York Stock Exchange. Volume was below average at 4 billion shares.

The supercommittee stalemate is supposed to trigger automatic spending cuts across the government, but there were already hints that Congress would find a way around them. Analysts say that could lead to another downgrade of the U.S. credit rating.

In addition, the breakdown raises questions about how Congress will find a way to extend a 2 percentage point cut in the Social Security tax. Congress passed it for one year, and some lawmakers support extending it because economic growth remains weak.

Each of those measures puts cash in the pockets of Americans, who can spend it and help the economy grow.

It also shows lawmakers may not be able to make progress on anything budget-related in the coming months, said Robert Pavlik, chief market strategist with Banyan Partners LLC in New York.

"It shows that there's a bigger problem at hand, and if they can't work to resolve these relatively small yet meaningful issues, what's going to happen if we get into a situation like Europe is in?" he said. "And we're kind of headed there."

The result was another day of heavy selling in a market that has grown used to big swings.

Volatility seized the stock market in late July, when Congress was wrestling with whether to raise the limit on how much the federal government can borrow.

The Dow rose or fell 100 points or more on 15 trading days in August, 16 in September and 15 in October. It was on pace Monday for its 10th triple-digit move this month, with six trading days to go.

"People are getting so short-term oriented now that all they know is how to make day trades," he said.

The selling swung the Dow from a gain for the year to a loss, the first time that has happened in a month.

Across the Atlantic Ocean, Moody's, a prominent ratings agency, warned that France could face a downgrade because the debt crisis in Europe has pushed borrowing costs higher for the French government. For now, France has an AAA rating, the best.

One European country after another has fallen into crisis because of debt. Wary of the ability of countries to pay back their loans, bond investors have insisted on higher returns on national bonds, pushing borrowing costs to dangerous levels.

Investors still see American debt as safe, despite the failure of the supercommittee. On Monday, the yield on the benchmark 10-year Treasury note fell to 1.97 percent. It traded at 2.01 percent late Friday.

Because bond yields move in the opposite direction from bond prices, the lower yields are a sign that investors are buying American bonds and believe in their safety.

The Nasdaq composite index declined 51, or 2 percent, to 2,522. In Europe, the main stock indexes in France and Germany lost 3.4 percent.

The steepest falls last week came Wednesday and Thursday, after Fitch, another ratings agency, warned that the European debt crisis could hit the largest American banks. The S&P 500 is down more than 5 percent for the year. On Nov. 15, it was up slightly.

The declines Monday were broad. Energy and technology stocks lost the most. All 30 stocks in the Dow average fell, led by Boeing Co. with a 4.7 percent decline.

The dollar rose along with U.S. Treasury prices.

Alleghany Corp. fell 7 percent after the property and casualty insurer said it had agreed to buy the reinsurance company Transatlantic Holdings Inc. for $3.4 billion. Transatlantic edged up 1 percent.

Irish electronics company Cooper Industries PLC bucked the market trend, rising 2.6 percent, after S&P said it will be added to the S&P 500 index. Stocks often rally when they are added to major indexes, because investment funds that mirror the indexes must buy them.

Hewlett-Packard fell 3.5 percent ahead of its fiscal fourth quarter earnings report, due out after the market closes on Monday. An analyst with Baird Equity Research said he expects HP to lower its outlook for the next fiscal year.