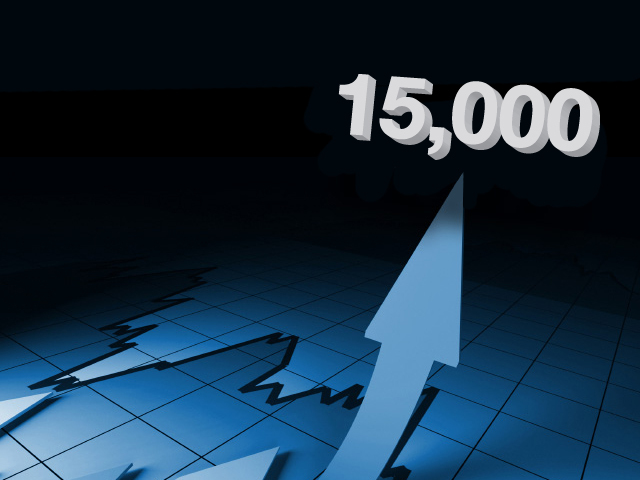 (MoneyWatch) Records fell on Wall Street today as monthly employment numbers suggested that the American economy that is not as ailing as many people had feared.

The S&P 500 gained 16 points to close at a new high of 1,614, busting through the 1,600 level for the first time. The Dow Jones industrial average finished at 14,973, a gain of 142 points. The blue-chip index had pierced 15,000 for the first time during the trading session but couldn't hold that level into the close.

The rally continues to confound the doubters, who say the market has gone mostly one way -- up -- and is overdue for a pullback. At these levels, the Dow is up 14 percent so far this year and the S&P 13 percent. It first crossed  the 10,000 threshhold on March 29, 1999.

Prompting the euphoria was the Labor Department's non-farm employment report for April, showing that employers added 165,000 jobs. That surpassed last month's weak labor growth although it was not enough to send the jobless sharply lower.

The unemployment rate ticked down to 7.5 percent, from 7.6 percent the previous month, and is now at a four-year low. The government also revised upward job numbers for the previous two months, putting the payroll gain at 138,000 for March and 332,000 for February.

"Our assessment of the outlook had already factored in a stronger April employment situation, compared with March. That said, the full impact of the sequester cuts is yet to be felt and things will likely get softer before improving. Nevertheless, the April number provides a good starting point for the second quarter."

"We are not convinced equities will continue to prosper in the second half of this year if the labour market continues to strengthen," wrote Capital Economics senior markets economist John Higgins in a note this morning. "Admittedly, the drop in the unemployment rate alongside a healthy increase in non-farm payrolls will have soothed fears of another spring slowdown... But the healthier the economy becomes, the more inclined the Fed will be to trim its asset purchases. This poses a threat to a stock market that has undoubtedly been supported by quantitative easing."

Economist Dean Baker of the Center for Economic and Policy Research, who has been a staunch critic of austerity policies leading to the sequester, said in a research note, "This report is consistent with the weak growth we have seen since the end of the stimulus. It will be surprising if the unemployment rate does not rise by the end of the year."