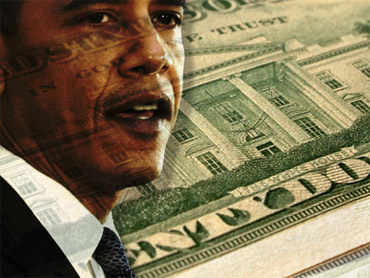 (CBS/iStockphoto)
Last week Washington, D.C. was buried in two feet of snow. Today, if you are a journalist covering Capitol Hill, chances are your e-mail inbox is buried in dueling press releases about the one-year anniversary of the stimulus package and whether or not it has helped the struggling economy.

House Minority Leader John Boehner's press office put out this 37-page report outlining what Boehner calls "the Democrats' broken promises and wasteful spending." Boehner's statement also said this stimulus anniversary "marks one year of broken promises, bloated government, and wasteful spending. The majority promised that under their 'stimulus' unemployment would not exceed eight percent and job creation would begin 'almost immediately.' But since President Obama signed it into law, more than three million Americans have lost their jobs, unemployment is near 10 percent, and the deficit is set to hit a record $1.6 trillion."

House Republican Whip Eric Cantor's press office distributed a list of stimulus spending "lowlights." The projects range from spending $550,000 on a skateboard park in Pawtucket, Rhode Island to $390,000 for a study on the link between malt liquor and marijuana use.

And Republican Study Committee Chairman Tom Price's (R-Ga.) statement pretty much summed up most Republicans' take on the package that did not garner a single House Republican vote: "At age one, stimulus still struggles to crawl: Experiment Officially Failed."

But Democrats weren't going to let Republicans fill up reporter's inboxes alone. Numerous leadership and committee press offices sent out a flurry e-mails with the letters ICYMI in the subject line -- that's "in case you missed it" for anyone not familiar with press operation acronyms -- pointing to columnist David Leonhardt's New York Times piece this morning. In the column, Leonhardt defends the stimulus and argues that the economy would be worse today without it and that nearly two-million jobs that were created or saved would not exist without the package.

House Speaker Nancy Pelosi's press office also sent around a list of stimulus projects that directly benefited Boehner's congressional district and his state of Ohio. The benefits ranged from the retention or hiring of police officers to road construction projects. Pelosi spokesman Nadeam Elshami wrote that "Republican leaders in the House are spending their time in Washington asking 'where are the jobs' from the recovery package, but somehow they ignore the fact that jobs have been created or saved in their own Congressional Districts."

Democrats on the House Education and Labor Committee win the blue ribbon, though, for stimulus anniversary creativity by releasing this spoof on an iPhone ad. Instead of "there's an app for that," they use "there's an ACT for that." Get it?

No matter what the truth is about the stimulus act, public perception is the real battle Democrats have to fight politically as 2010 elections loom. And they are fighting that battle hard, based on the amount of e-mail traffic and stimulus promoting events Democrats are holding across the country today. It's not going to be easy based on a CBS News/New York Times poll released last week that showed just 6 percent of the American public thinks the stimulus created jobs. Boehner's spokesman Michael Steel ran with that figure yesterday saying that more people believe that Elvis is still alive than believe the stimulus is working.