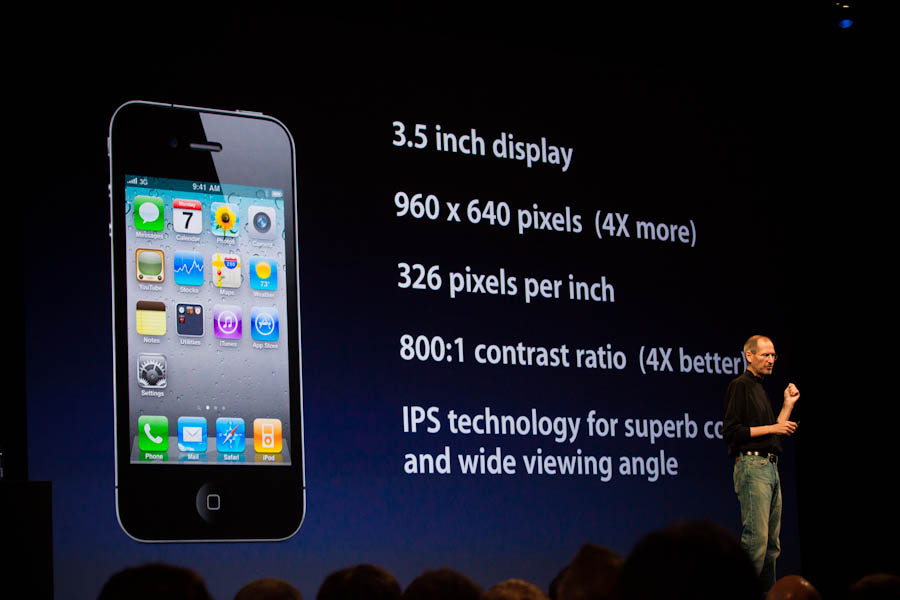 The worst-kept tech secret in Silicon Valley is now official: Apple today introduced the iPhone 4, a unit chockablock with 100 new features that the company hopes will help further lengthen its lead over rival offerings.

Apple plans to charge $199 for the 16GB version of the unit, the same as its 3GS iPhone, and $299 for the 32GB model. Jobs said that AT&T would make "an incredibly generous upgrade offer." "If your contract ends any time during 2010, you can get a new iPhone 4 if you resign a new contract," he said.

The units go on sale June 24, though pre-orders will be taken starting on June 15. Apple plans to ship the units in the U.S. and four (still undisclosed) countries on the first day but will be available in 88 nations by September.

The smartphone includes 100 new features but at 9.3 mm thick - roughly 25-percent thinner than the iPhone 3GS - Jobs called it "the thinnest smartphone yet." Apple also renamed the iPhone OS as the iOS, which will include 1500 new features including multitasking, a unified inbox, and app folders.

The new unit features a front-facing camera, a receiver, a microSIM tray, and a camera with LED flash in the back. On the bottom, it sports a microphone, 30-pin connector, and speaker. The top of the unit includes a second microphone, a second sleep/wake button, and a noise-cancellation button. Jobs also said that the glass on the new version of its smartphone was of a higher optical quality and more scratch resistant than its predecessor.

Developers gave their loud approval when Jobs also announced that the iPhone 4 would have a sharper display with 326 pixels per inch quality. He said that 300 pixels per inch constituted the limit of the human retina and so things will start to look like continuous curves at that level. Text will look like a printed book, he said.

The iPhone 4 camera shoots gorgeous 5-megapixel photos and stunning HD video. And with its advanced backside illumination sensor, it captures beautiful images even in low-light settings. The built-in LED flash does double duty. When you're taking pictures, it works as a flash. When you're shooting video it can stay on to light up the scene. And on the front of iPhone 4, the built-in camera is perfect for making FaceTime calls and shooting self-portraits.

At the same time, Jobs also made clear that Apple would stick with its third-party development plans despite the ensuing controversy over its vetting of third party tools on Apple's App Store. Earlier this spring Apple modified the terms of its iPhone 4.0 software developer kit license, which essentially prevented developers from using Flash to build iPhone applications. At the time, Adobe complained it was being unfairly shut out and the company subsequently warned in a filing with the Securities and Exchange Commission that its business may be harmed.

Despite rumors that Apple's policy was being investigated by regulators, Jobs told the crowd the company was doing right by its developers and its users.

"I want to make something really clear. We support two platforms at Apple," Jobs said. The first was HTML5, a fully open and uncontrolled platform. The second platform, Jobs said, was Apple's App Store.

You've read a lot about our process of approving apps. We get 15,000 apps submitted every week. And they come in up to 30 different languages," he said. "Guess What? 95 percent are approved within seven days."

"Why don't we approve the other 5 percent? No. 1 reason? App doesn't do what developer says it does. Second reason is use of private APIs. We're clear on this. Developers who do that know what they're doing, but they can't. Third reason we reject apps? They crash. If you were in our shoes, you'd reject those apps for the same reason. Just wanted to give you those facts."

So far, Jobs added, users could choose among 225,000 applications on Apple's App Store. He said the company had registered 5 billion downloads from the App Store. Jobs got loud cheers when he announced that 70 percent of app sales go to developers, who to date have received $1 billion from Apple.

Making the pitch why it's in their best interests to stick with Apple, Jobs said the company would this month sell its "100 millionth iOS device - a list that includes iPhones, iPod Touches, and iPads. "There is definitely a market for your applications," Jobs said.

Apple also used the occasion to announce that it's renaming the operating system simply as iOS 4 "because it's on iPad, iPod Touch, and iPhone," Jobs said.

The new operating system, which debuted in April when Apple first announced what was called iPhone OS4, includes the ability to multitask, along with a unified e-mail box and app folders - among the most wanted features mentioned by users. As he walked the crowd through a demo, the always stage-savvy Jobs couldn't resist the opportunity to get in a dig at Larry Page, quoting Google's co-founder as saying that software running in the background runs down a battery.

Another new feature that's likely to generate buzz is Apple's move to bring iBooks to the iPhone. In fact, Jobs said, the application will automatically and wirelessly sync a reader's current place, bookmarks, and notes across all their devices.

"So you can start it on your iPad, pick up on your iPhone, if you want," he said.

Separately, Jobs said that Apple already had $60 million in advance commitments from advertisers interested in participating in the company's iAds service. He said the program would commence on July 1.