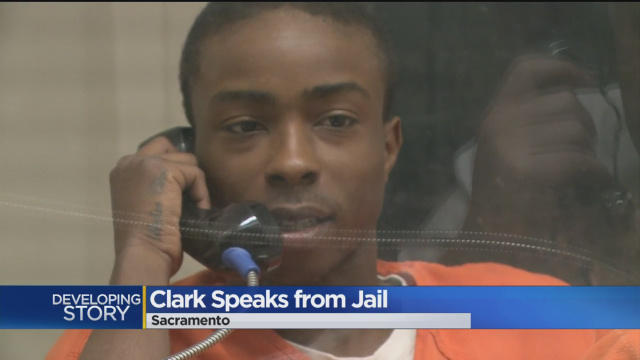 SACRAMENTO — Two officers who shot a man to death in the backyard of a home are back on the job. Sacramento Police say the officers are back at work more than a month after the shooting of Stephon Clark. CBS Sacramento reports the officers are not on patrol, due to safety reasons.

The officers were responding to reports of someone breaking into vehicles when Clark was spotted by a police helicopter climbing into the backyard of a family member's home. Body camera video showed the officers confronting Clark, who fled. They pursued him into a dark backyard and when they rounded the corner saw an object they immediately identified as a gun. Within five seconds, they opened fire, killing Clark.

It was later discovered that Clark did not have a weapon, just a cellphone.

The officers' names have not been publicly released.

Meanwhile, police on Thursday arrested the brother of Stephon Clark on suspicion of felony assault and vandalism, authorities said. Stevante Clark, 25, also is accused of making criminal threats and abusing a 911 emergency line.

Police did not provide further details, citing an ongoing investigation.

Stevante Clark walked through the doors of his jailhouse interview room wearing an orange jumpsuit, and a wide smile, turning to wave to the camera, before picking up the phone to talk. He had a 30-minute exchange with CBS Sacramento's Steve Large.

Large asked Clark about his arrest.

"I've never touched anybody in my life," Clark said.

"We are getting multiple calls about it," a dispatcher said. "He's streaming it live on the internet, armed with a machete. Threatening a female at that address."

Clark paused when Large asked about that.

"Ah, they just, you have to talk to my lawyer," Clark said.

Stevante Clark burst onto the national scene when he jumped on the mayor's desk during a Sacramento City Council meeting.

His roommate Alex Rouska called the police earlier this week after he told CBS Sacramento Clark made several threats against him and his wife.

"He threatened to rape her," Rouska explained. "He literally got down right here and made eye contact with my wife in the kitchen and was like 'you're done.'"

Rouska and his wife Samantha say they met Clark four months ago when he moved into their spare bedroom. They described him as a perfectly fine tenant who paid rent on time and had no issues.

"This stuff with his brother broke him," Rouska told CBS Sacramento. "He's broken and it's not his fault that he's broken and somebody needs to help fix that boy."