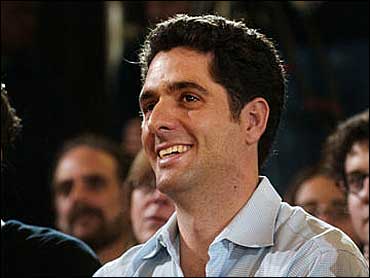 This year, sons and daughters are playing a more prominent role on the campaign trail. From President Bush to Vice President Dick Cheney, to Sens. John Kerry and John Edwards, they're all getting their children out in the spotlight.

Chris Heinz, one of Kerry's three stepsons, quit his job in finance last year to work full time on the campaign. The Early Show's Hannah Storm spent some time with 31-year-old Heinz, talking about life, love and the loss of his father.

Sen. John Heinz died in a 1991 plane crash. Of his father's death, Heinz says, "I don't think I grieved it particularly well, but in the last five or 10 years of my life, after a couple years of setting myself straight, you try to piece together a legacy from someone who's no longer there."

Heinz was born into a family of fame and fortune. His great-great grandfather founded the H J Heinz company in 1869, in Pennsylvania, the same state where John Heinz served as a congressman and senator.

Says Heinz, "I'm still trying to figure out how he did it what he did. But it always seems to me that he got into politics to get out of the family business."

Growing up in Washington D.C., Heinz also spent time at his family's homes in Ketchum, Idaho and Fox Chapel, Penn. His father died on the day Heinz was accepted to college. It devastated the whole family.

"My mom and my father had an amazing partnership and to see someone's worldview or the way they approach life suffer because they lose their partner was tough," Says Heinz. "I just know there was a big inflection point when John (Kerry) came back into our lives."

Heinz recalls, "I literally was excited to think that my mother would have someone to share her life with again."

But Chris Heinz sees similarities. He says, "I really do believe that John Kerry and John Heinz were closer than John Heinz and George Bush would be today."

In fact, Kerry and Chris Heinz's own lives have some parallels. Both attended St. Paul's Prep School, both graduated from Yale and both have an affinity for skiing. And both see Teresa as an ideal first lady.

"She may be rich, she may be sophisticated," Heinz says. "But she actually didn't start that way and she's lived a version of the American dream."

"At the end of the day, John Kerry and John Edwards are a great team," says Heinz. "And I think they're very complementary. I think of John (Kerry) as having more of a paternal feel for people and John Edwards has a visceral connection."

Edwards and Heinz share their own connection. In 2000, Edwards was voted People magazine's sexiest politician, while this past June, Heinz was one of the magazine's 50 hottest bachelors.

Heinz is now devoting his time to raising money, enlisting volunteers, stumping in the battleground states and telling people about his stepdad.

Says Heinz about Kerry, "There really is a warm and fuzzy side to John which is goofy and likes to laugh."

The handsome Heinz even hobnobbed with "Shakespeare In Love" star Gwyneth Paltrow. "I have a non-sexual male crush on (Coldplay singer) Chris Martin, so I think she's done just fine for herself."

As of now, for this Romeo, his Juliet may have to wait in the wings.

"I'm single and I intend to be until after Nov. 2," says Heinz, adding that he has he has no plans for what he'll do after the election. He won't rule in or out a future in politics for himself.